There is nothing more annoying than when the liberals/media “ascribe” motives and mindset, as well as intent, onto conservatives without once bothering to talk to, or research those same individuals.

We say “protest,” they say conservatives tried for “insurrection” and wanted to “murder” Democrat politicians,  without any thought to the fact that had any of that been true, there would not have been a million person protest in DC, it would have been forty million armed citizens taking DC and every single state capitol.

Conservatives do not want blood flowing through the streets though, but by their very own words and actions, democrats do want conservatives dead.

What makes that statement any better than liberals falsely attributing motive, intent and mindset  to conservatives?

They use their opinion of what we want, interpretation of what we say (without bothering to provide action transcripts, direct quotes or video footage as proof),  and assign the motives they are displaying themselves.

We are using their own words, publicly spoken, or bills proposed, or on-air media punditry, all clearly stating or indicating what they want to do to conservatives.

Example:  MSNBC brought on former FBI agent Clint Watts, who informed the MSNBC audience that if Anwar Awlaki had said what Trump said, the result would be a “drone strike.”

We had a policy, and it was very controversial, it was carried out under the Bush years, and under the Obama years, of attacking terrorism at its root, of going after and killing, and in the case of Anwar Awlaki, an American, a Yemeni-American, with a drone strike for the crime of inciting violence, inciting terrorism.

The way you root out terrorism, is to take on, in the case of Islamic terrorism, kill those who incite it.

ANP recently reported that the DHS has issued an advisory which targets protesting conservatives as “Domestic Violent Extremists (DVEs).”

So, what we have is liberals labeling conservatives causes as insurrectionists, accusing them of “inciting” an insurrection, therefore slapping all who protest on the right, with the label of extremist, to which the media casually associates with getting struck and killed by drones.

The irony of those claims about inciting violence when these same bad faith pundits completely ignored multiple liberal politicians encouraging riots, and the media, defending and justifying the looting, arson, harassment and destructions of liberally run cities by Antifa and BLM groups, is astounding. 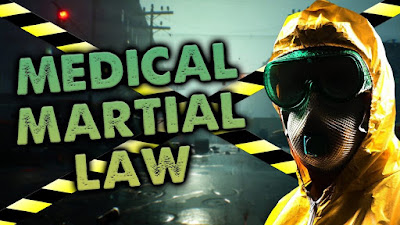 That aside, what we are seeing playing out right before our eyes is the use of COVID to exert total control over Americans, and those they cannot control, they want dead.

Let me provide a different example of the control assertion: COVID-19 truly opened many eyes.

They saw governors lockdown whole states, force people to wear masks, decree how close they are allowed to stand to each other. In some cases the restrictions included attempting to tell people who they could, or couldn’t have in their own homes.

The deemed what businesses were essential and “non-essential,” which tossed tens of millions of Americans into the unemployment and food bank lines.

These actions negatively affected the entire economy. Forced permanent closures of a number of businesses. Some might say most importantly, the aforementioned actions resulted in food shortages across the nation, with stores forced to limit the purchase of a number of items from cleaning supplies to canned goods to meats.