Speaking of the inauguration, I don’t know what was more peculiar: Lady Gaga sweeping out onto the capitol dais in Hunger Games drag —and I mean but exactly, down to the golden mockingjay pinned above her left breast — or Garth Brooks post-hymn dash to the exit as though he just heard the repo man was coming for his Gulfstream jet parked across the Potomac at Reagan National Airport.

The immense ranked American flags deployed silently down the mall in place of annoying US citizens lent a funereal vibe to the proceedings (as in the death of your country), while the thousands of massed national guard troops signaled the paranoia crackling under the surface as Ol’ White Joe Biden stepped forward to commence his party’s punishments against the unWoke (disguised as a call for “unity”). He was surrounded by a virtual wax museum of Deep Staters salivating for the upcoming blood-feast: The Obamas, Hillary and Bill (nodding off), Nancy, Chuck, Mitch… but just who was the Asian chap sitting behind the man-of-the-hour? Secret Service? Or his new minder (courtesy of Uncle Xi)? 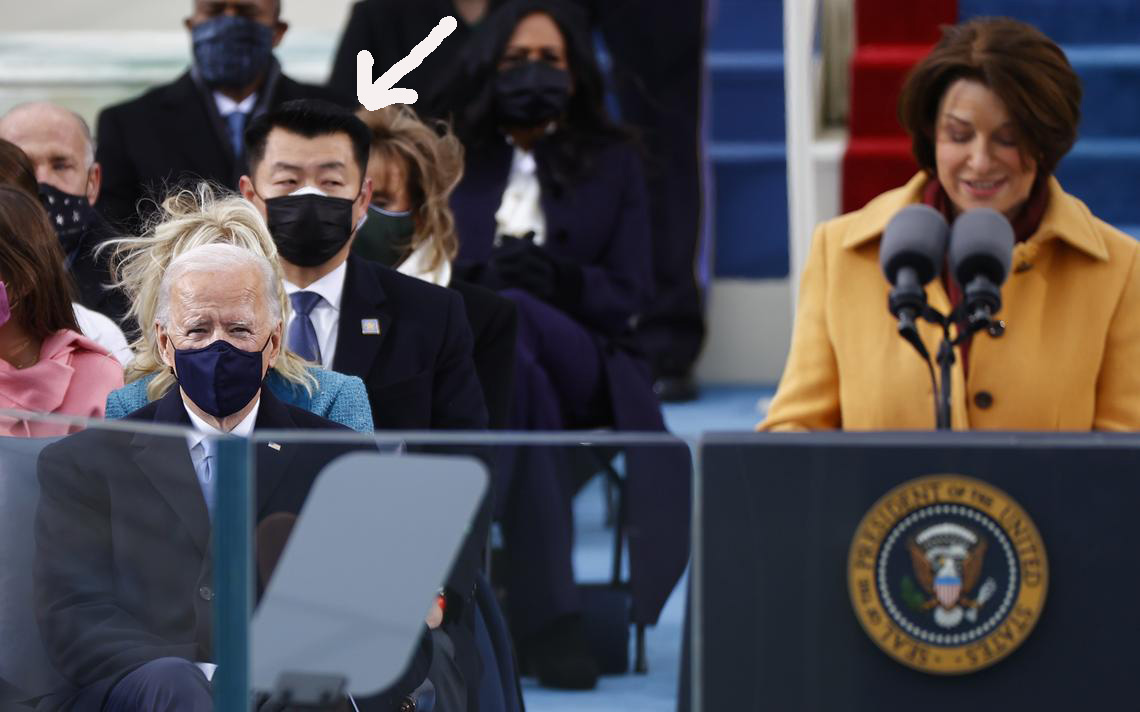 As for Mr. Trump, he departed as he had arrived in 2016: stridently contemptuous toward the parasitical oligarchy that finally expelled him like a bladder-stone. The threatened impeachment trial will be a marvel of casuistry — a procedure for removing someone from office who is no longer in office — and also for the transparently flimsy charge of “inciting the insurrection” at the capitol. As if to underscore the absurdity of that, Antifa squads rioted in Portland and Seattle on inauguration night. Their banners expressed less-than-jubilant sentiment for the new regime. The Portland outfit broke windows and spray-painted the city’s Democratic headquarters, faking-out pols who had warned against an uprising of “white supremacists.” Of course, all those arrested would be promptly released without charges — demonstrating just how serious the Wokester officials running those cities really are about criminal anarchy. The grannies swept into the capitol rotunda by Antifa incursionists January 6th won’t be so lucky.

Neither did a much chattered-about military takeover happen during the tension-filled transition hours, though kibitzers on the web insist days later that it remains secretly underway. On his way out, Mr. Trump failed to pardon either Julian Assange or Edward Snowden, a disturbing failure, while he commuted the sentences of a couple of two-bit rap-stars, based on their contributions to advancing human dignity. And whatever Mr. Trump finally rooted out in the way of declassified FBI documents has already disappeared into the DC quicksand.

Much adored as he is for valiantly opposing everything swampish, it might be best now for Mr. Trump to just retire from the political scene and leave the battle to others. He made his point, colorfully and often bravely, considering the astounding bad faith of his adversaries, though he certainly could have articulated the stakes better and with more decorum. He leaves not merely a vacuum but a sucking chest wound of leadership opposing hysterical and tyrannical Wokery. Who will step forward in his absence? Probably someone we haven’t heard from yet. That’s how these things work.