– Ignore These Documented Facts At Your Own Peril!

Before we dive into the ‘main course’ of this story, the following excerpt from ‘The Jeremiah Project’ titled ‘Understanding the Hegelian Dialectic’ is a ‘must-understand’ appetizer for what’s to come. Though written several years ago, as we’ll explore within this ANP story, its warnings stand as true today as they have throughout history. 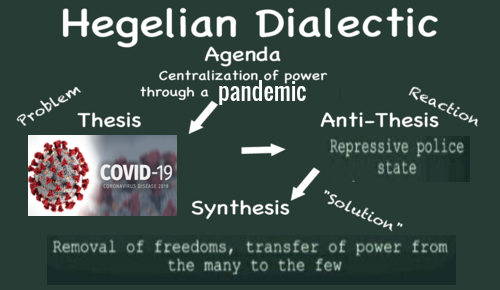 To better understand the New World Order strategy behind the crises we experience, it is important you first understand “Problem-Reaction-Solution” or the “Hegelian Dialectic” from the German philosopher, Georg Wilhelm Friedrich Hegel.

It is stated by Heinrich Moritz Chalybäus as comprising three dialectical stages of development:

1) A thesis, giving rise to its reaction,

2) an antithesis which contradicts or negates the thesis,

3) and the tension between the two being resolved by means of a synthesis.

As Paul Joseph Watson reports on page 13 of his 2003 book “Order Out of Chaos: Elite Sponsored Terrorism & the NEW World Order”, the Hegelian Dialectic works just like this:

The manipulating body covertly creates a problem and then directs the media to incessantly focus on it without recourse. The problem could be anything – a war, a financial collapse, a rash of child abductions, or a terrorist attack. The power of the media can create the false perception that a big problem exists, even if it doesn’t … (ANP: Sound familiar in this ‘age of Trump derangement syndrome and covid-19 hysteria’?)

Once you have created this problem you make sure that an individual, a group or an aspect of society is blamed. This then rallies the population behind the desperate lunge for a solution to the problem. ‘Something must be done!’ they cry in unison.

The solution to the problem is always a further curtailment of freedom and an advancement of one or more aspects of the New World Order agenda – whether that is geopolitical expansion, new laws or the implantation of new societal worldviews.”

And while we’ll surely be called ‘conspiracy theorists’ for bringing up the theory that Covid-19 was ‘created’ with several very sinister globalist purposes/goals in mind, including getting President Trump out of office via his ‘demonization’ while allowing this ‘pandemic’ to usher in the globalists satanic ‘new world order’, the ‘Hegelian Dialectic’ is a time-tested strategy used by ‘rulers’ throughout history to implement tyranny and great changes they couldn’t have accomplished otherwise.

(ANP EMERGENCY FUNDRAISER: Due to unexpected medical and emergency repair bills, please consider donating to ANP to help keep us in this ‘Info-war’ for America at this most critical time in US history, during a time of systematic ‘big tech’ censorship and widespread Democrat corruption.)

First, below is an excerpt from a review below of Paul Joseph Watson’s book “Order Out of Chaos – Elite Sponsored Terrorism & the NEW World Order”. Please keep in mind this book was written in 2003, and the review in 2004, while George Bush was in office. But as we’ll see within the rest of this story, all of the information reported applied to the administration of Barack Obama as well and will surely apply to Joe Biden should he ever get into the White House.

The Hegelian Dialectic, thesis, antithesis, synthesis, or problem, reaction, solution, is illustrated in spades by our present Administration according to Paul Joseph Watson and his book proves how it has worked in America since 9/11.

He includes a quote from Hermann Goering, president of the Reichstag, Nazi Party, and the Luftwaffe Commander in Chief that has been making the rounds on the internet ever since the events of 9/11.

“Naturally the common people don’t want war. Neither in Russia, nor in England, nor for that matter in Germany. That is understood. But, after all, it is the leaders of the country who determine the policy and it is always a simple matter to drag the people along, whether it is a democracy, or a fascist dictatorship, or a parliament, or a communist dictatorship.

Voice or no voice, the people can always be brought to the bidding of the leaders. That is easy. All you have to do is tell them they are being attacked, and denounce the peacemakers for lack of patriotism and exposing the country to danger. It works the same in any country.”

Watson chronicles the history of this practice, from the Romans, through both our World Wars, our first Pearl Harbor, Operation Northwoods and on in an attempt to install police state conditions all over the world and to establish a New World Order of repression and control of all peoples.

They will plot “imaginary terror attacks’ on the U.S. and then thwart them, “…reassuring you that they will protect you by taking your rights away.” The main thrust of this work is to warn the American people that we are being vastly lied to and manipulated. All the facts are documented in this book. Ignore them at your own peril.

And as Electroverse reports in the excerpt from this recent story below, we’re clearly watching more ‘hegelian dialectic’ being played out before our eyes with this Covid-19 pandemic. From their story.