This Spike of New Businesses is a Doozie, on Several Levels

This Spike of New Businesses is a Doozie, on Several Levels

People are massively striking out on their own. But new businesses with planned wages have been getting scarcer since 2007.

Early on in the Pandemic, as 30 million people lost their jobs and gigs, the number of new businesses exploded higher, perhaps fed by stimulus money and the extra $600-a-week in unemployment benefits that allowed people to strike out and go after their dreams, or fed by desperation, or fed by new opportunities that arose and that some people saw and grabbed. 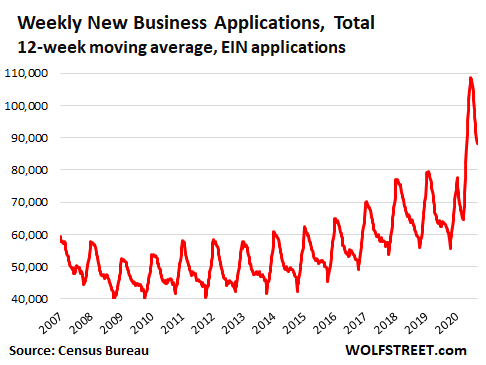 Since the end of May, there have been 2.48 million new business applications, up 52% from the same period last year.

The Census Bureau’s weekly data on “business formations” is not survey-based. It’s based on applications by new business entities for a federal “Employer Identification Number” (EIN), the taxpayer identification number by which the IRS tracks businesses for tax purposes. When I started my Wolf Street media mogul empire, I first set up a corporation, then the corporation applied for an EIN (my bank did that), and a few minutes later, using the new EIN, the bank set up a bank account for the corporation.