A World Most Could Have Never Imagined Awaits Us In 2021

Imagine just a moment if you will that towards the end of 2019 or the very beginning of 2020, you had fallen into a deep coma, only to‘awaken’ from your deep slumber at the end of November 2020.

Awakening to find a fully ‘masked population‘, an election thrown into utter disarray by Democrat fraud and cheating that has caused half or more of the US population to no longer trust our electoral system and a rapidly growing ‘pandemic enforcement system’ straight out of a free nation’s worst nightmares, one could be forgiven if they suddenly believed they’d been cast into something straight out of George Orwell’s “1984”.

With democrats/globalists now pushing China’s communist Covid-19 system that says all human beings should be tracked and monitored to help stop the spread of the virus sounding just like ‘Big Brother’ watching ‘the masses’ wherever we go, NY City establishing ‘virus checkpoints’ while mandatory covid vaccination ‘papers’ to travel on airlines give us another peak at the future, we’d warned on ANP back on October 31st that we were witnessing ‘the boiling frog syndrome,‘ aka ‘incrementalism’, in action.

Reporting in that story titled “New ‘Pandemic Predictive Programming’ Movie Suggests They’re Setting Us Up To Be ‘Cooked’ Like Frogs In A Slowly Boiling Pot Of Water As Deagel’s Population Reduction Forecast Accelerates”  that we’ve watched the slow erosion of our Constitutional rights in a brazen globalist attempt that proves they’re not even trying to hide their satanic agenda anymore, should Joe Biden ever make it into the White House in January, we clearly haven’t seen anything yet.

So while the US Supreme Court recently struck down New York governor Andrew Cuomo’s draconian edict on religious services in a victory for the 1st Amendment and the American people, as Zero Hedge reports in this new story, according to Cuomo, the verdict of the top court in America is ‘irrelevant’.

Well if that’s the case, ‘Andy’, then the entire fraud you call the ‘2020 election’ is quite ‘irrelevant’, too! 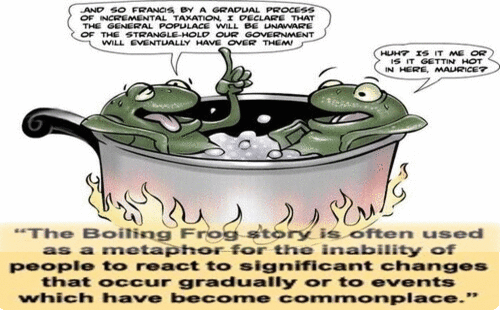 As Zero Hedge reported in this story, Cuomo when faced with facts resorted to ‘mumbo-jumbo’.

During a Thanksgiving Day conference call with reporters, Cuomo said the order was moot because the religious institutions involved in the lawsuit are no longer in designated red and orange zones in Queens and Brooklyn – therefore the restrictions, capping attendance at houses of worship – no longer apply.

“It’s irrelevant of any practical impact because of the zone they were talking about is moot. It expired last week,” he added. “It doesn’t have any practical effect.”

Yet as Susan Duclos pointed out to me after that ruling came out on Thanksgiving morning, the decision was quite a lot more than just a ‘decision’, with Cuomo correct in pointing out that “it’s more illustrative of the (Conservative-leaning!) Supreme Court than anything else“.

So while there’ll absolutely be many huge fights ahead that will likely go to the Supreme Court, (possibly even determining our next President!), as the top-rated comment on that Zero Hedge story by ‘Lansman’ astutely pointed out: “Do lock downs prevent the spread of covid? If the answer is no… why do we need another one? If the answer is yes… why do we need another one?”

Another commenter answered ‘Lansman’ perfectly: “To usher in the NWO.”

(ANP EMERGENCY FUNDRAISER: Due to unexpected medical and emergency repair bills, please consider donating to ANP to help keep us in this ‘Info-war’ for America at this most critical time in US history, during a time of systematic ‘big tech’ censorship and widespread Democrat corruption.) 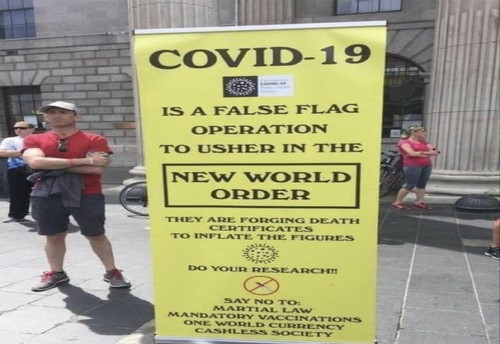 As we’d reported in this November 23rd story on ANP titled “The ‘Great Reset’ To Bring In A ‘Brave New World’ Was Launched By A Transhumanist Whose Ideas Are As Bizarre And Dangerous As They Come – Politician Warns Of ‘Crazy, Kooky Stuff’ Ahead!”, the democrats/globalists/rinos have fully weaponized this ‘pandemic’ against the free people of America to attempt to usher in their ‘great reset’, which the website Prophecy Tracker had pointed out is nothing less than ‘global communism’.