Non-Preppers Once Again Starting To Stockpile Everything But Food

Back in March ANP published a piece titled “Due To An ‘Outbreak Of Stupidity’ People Will Die Of Starvation Surrounded By Toilet Paper,” because when the initial quarantine lockdowns began, clueless Americans were more worried about paper products and wiping their butts than they were about eating.

The food shortages and limits on purchases came well after the toilet paper runs on any store that carried the product.

We are now looking at another round of quarantine lockdowns, and readers are once again sending ANP exclusive images, the majority of which are…Yup…..toilet paper aisles and other paper goods shelves quickly emptying, while a much smaller percentage of reports and images are showing food aisles, and those are from canned good shelves.

Stores are seeing a double-whammy with Thanksgiving shopping, mixed with panic shopping, showing that despite all their preparations and “pandemic pallets,” once again retailers were caught flat-footed.

Recent reports include Walmart reporting on shortages of paper goods (yes, toilet paper!) and cleaning supplies, at some of their stores in hard hit areas.

Walmart CEO Doug McMillon called it “disappointing” to see “as many out-of-stocks as we have in consumables right now generally,” although he said the situation had improved since the spring. He stressed that Walmart was better prepared to handle the demand than it was earlier in the year.

“It feels to me like we’ll work through this period of time better than we did in the first wave,” McMillon said.

Walmart is also claiming that they were seeing “big differences, depending on the communities that you’re in,” and “supply chains have not kept up with rising demand, and these goods have been harder to stock consistently in locations with sharp spikes in newvirus cases.”

Is that true, or is he just trying to put lipstick on a pic hoping people don’t realize it is still a pig?!?

Reader images sent to ANP over the last week tell a different story.

This image below was sent from the Poteau Oklahoma Walmart. 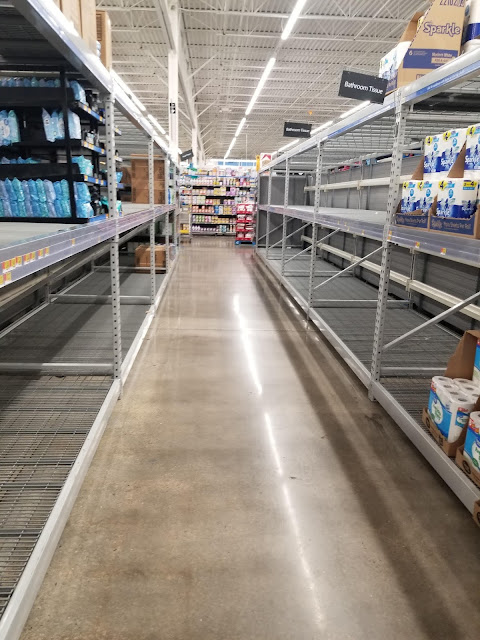 Poteau Oklahoma, which is one town/city in La Flores County, OK, according to the latest data on November 24, 2020, shows that there have been 11 new cases of COVID reported and 21 news reports of people recovered from COVID.

The same reader sent us an image of the paper towel section, which is far less stripped than the toilet paper, although the holes on the shelves make it clear they are having a hard time restocking. 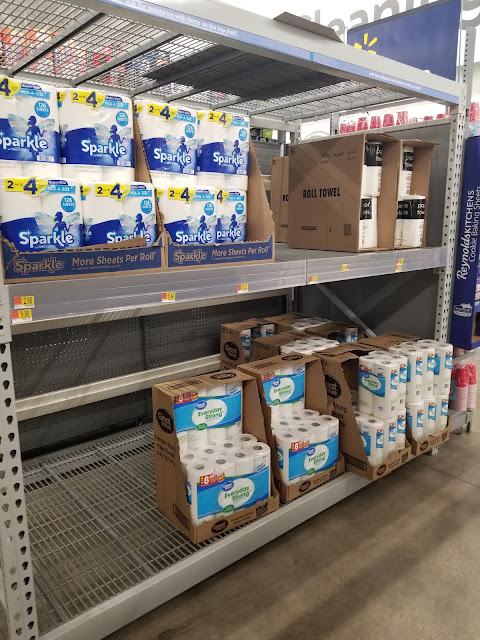 In Fayettville North Carolina, reports indicate they are limiting the supplies of certain products, including paper goods, but something about that in the report caught my eye.

“If we see another level of shortages on the national brands, we still have a good supply we’re able to pull from,” Buechner said, of essential supplies like tissue. I don’t think we’ll see a lot of customers buying a whole lot. Or, if they do, we’d be more prepared being able to manage that. Early on in the pandemic, it allowed us to sell out more quickly than we should have. If it happens again, we’ll have more limitations so we don’t run out quickly again.

So the supply is not more available to stores, they are just starting to limit what people can buy in a single shopping trip, earlier than they did last time.

It is still more difficult for those that are not preppers and aren’t prepared for shortages like what we are already seeing, so when they do to prepare, they can only grab one or two of the items they need the most.

Reports coming from Carolina, via CBSLA, are not only highlighting paper products, evidently those people are thinking about some food items, such as spaghetti sauces,

On Friday night, shelves at a Target in the San Fernando Valley looked eerily similar to scenes from the beginning of the pandemic.

“I wasn’t worried before, but I kind of am right now,” Debora Neff, a shopper, said.

Paper towels and toilet paper have been selling like hotcakes, and even some food items like spaghetti sauce have been in high demand.

And while many stores still have plenty of inventory, other places have started to see a run on certain items.

“Vons right now is actually pretty stocked, so you would think nothing is going on,” Lee said.

“I noticed that they have plenty of flour and yeast and baking supplies, but canned tomatoes, for example, I had a hard time finding and egg noodles for chicken noodle soup,” Neff said.

Another couple of images sent to us from Omaha Nebraska, shows some places are seeing far worse shortages than others.

The image was sent by a reader in the retail industry with the following message attached: “Hello and good afternoon.  Here is the paper aisle yesterday early afternoon at a store in Omaha Nebraska.  I currently work in and have for 24 years in grocery retail.  Obviously food will not be far behind.  Starting to see the uptick on panic buying now.  So should be days away if not in the next week or two.  Will update with more pictures as round 2 unfolds.  Thank you for all you do.”

Images below: First the paper towel aisle and the second is the toilet paper: