All of Hell HAD To Be Unleashed…

This morning started out on a terrible note. This led to the devil planting seeds of doubt, on top of seeds of confusion mixed with seeds of darkness. As these seeds began taking root in my mind and infiltrating my heart. So, God sent me an Angel of Light. A reminder of who I follow, why I follow Him and where we – we, that’s you and me – where we stand at this exact moment in time.

These are merely a few of our accomplishments. We have had a great leader who came from the billionaire class, looked at all us deplorable’s, the rejects and middle American’s and saw that we were actually people. As Michael Matt points out, the longer Donald J. Trump was President the more conservative he has become, the more he actually understood the deplorable’s and the more we respected him for seeing us. The longer Trump was in office the more conservative his entire family has become. I am NOT putting Trump on a pedestal – he, like you and me – is broken, flawed and is a complete disaster of a human. He, like most of us, knows, understands and turns to God, God’s one and only Son Jesus Christ and has the anointing of the Holy Spirit that has protected him with the Full Armor of God.

All of the demons of hell had to be unleashed on January 20, 2017. As President Trump was sworn in, using his own personal Bible not the demonic book issued by the government, the democrats called upon their minions in Hollywood, the media, big tech, the Pope, Wall Street, the City of London and any and all other demons from hell and put them on notice – a man reflecting the Light of God has arrived and agents of darkness must attack him. 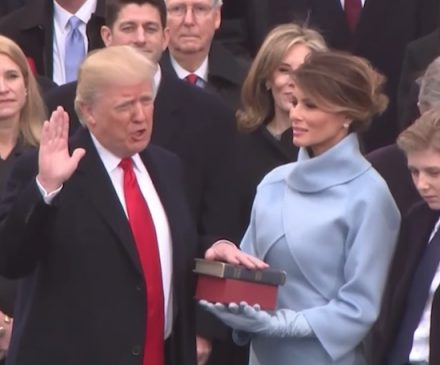 What have the agents of darkness called President Trump? Nazi, racist, tyrant, xenaphob (whatever that is), orange-man-bad, hate-monger, murderer. These are all the titles that belong to the agents of darkness – theses agents are merely using the words that have been suggested by the devil. Remember, the devil can not read your thoughts, but he can read the thoughts he gives you. Only good comes from God, this includes thoughts.

Well, Donald J Trump has not been destroyed. He is as fresh today as he was when he first announced he was running for the Office of Presidency. We have hope, because we have God on our side. We will be victorious because the battle has already been won.

Please listen to this video to the end.