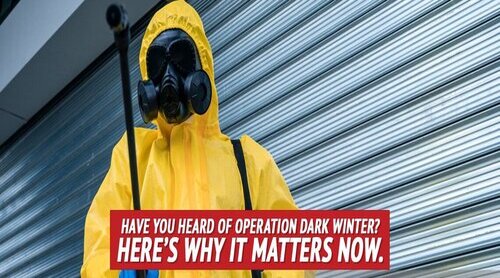 With the ‘winter of 2020/2021’ already off to a cold and snowy start across large parts of America, (and long before winter even officially begins!), and an Arctic blast set to unleash sub-zero temperatures across ‘middle-America’, remarks made by Joe Biden during the most recent Presidential debate have opened a lot of eyes, with Biden actually doubling down in his warning, seemingly about Covid-19, as heard in the 1st video at the bottom of this story: “We are about to go into a Dark Winter. A Dark Winter.”

Biden’s remarks were just the latest warnings of ‘a dark winter’ ahead for America, coming on the heels of this August 2020 story over at Nature.com in which they warned that “two decades of pandemic wargames failed to account for Donald Trump” as well as this May of 2020 story in which we’re told a Covid-19 ‘whistleblower’ had also warned of a ‘dark winter’ ahead for America. Yet as blogger Lenora Thompson asks in this recent story about Biden’s remarks, was Joe Biden using ‘code words’ in his ‘dark winter’ warning?

For those who aren’t yet aware, all the way back in 2001, a war game played out by numerous deep state agencies here in America simulated a biological attack upon America and coincidentally, or not, those exercises were called ‘Dark Winter’. As this recent story over at Infowars written by Adan Salazar had reported, “Operation Dark Winter” predicted not only deaths from a hypothetical ‘vaccine’created during the simulation but massive threats to civil liberties here in America, including all-out martial law.

As the Washington Standard had reported in this May of 2020 story titled “Those Who Planned The Enslavement Of Mankind Of Mankind Warn Of “A Dark Winter” For Us”, “the elitists who planned this scamdemic from the beginning are now warning us that we are going to face a ‘dark winter.’ This is not about health and hasn’t been from the beginning. This is about control and they are trying to use fear to manufacture your consent to enslavement. DO NOT FALL FOR IT.”

So with the globalists heavily pushing a ‘dark winter’ ahead for America, and even Joe Biden using those words twice during his debate with President Trump, we should all be on the lookout for more and more mainstream news media outlets and Democrat politicians using the phrase ‘dark winter’, fully understanding what it refers to. We’ve embedded the full ‘Dark Winter’ pdf at the bottom of this story. From this Infowars story first before we continue.

A 2001 war game simulation of a biowarfare attack in the United States carries eerie similarities to the current coronavirus pandemic and lockdown that devastated the planet.

Interest in the Dark Winter Bioterrorism Exercise, carried out June 22-23, 2001 at Andrews Air Force Base, peaked after 2020 Democrat presidential candidate Joe Biden made a reference to an upcoming “dark winter” in the United States, referring to the possibility of another coronavirus outbreak this winter. “We’re about to go into a dark winter. A dark winter,” Biden said at Thursday night’s debate. “And he has no clear plan, and there’s no prospect that there’s going to be a vaccine available for the majority of the American people before the middle of next year.”

The Dark Winter Exercise, run by the Johns Hopkins Center for Civilian Biodefense, Center for Strategic and International Studies, ANSER, & the Memorial Institute for the Prevention of Terrorism, was an extensive simulation that attempted to envision federal government response to a nationwide smallpox outbreak.

A video presentation used during the scenario imagined riots over vaccine and medical supplies, a collapse of the national economy and “desperate measures” the government is forced to take, including considering the implementation of martial law.

A fake news report in the exercise features a biowarfare defense expert using the term “dark winter” as he tells a reporter there’s not enough vaccines to go around. “Meaning we don’t have enough vaccines for the United States?” the reporter asks. “We don’t have sufficient stockpiles for the people in Oklahoma, Georgia and Pennsylvania, much less for the entire US population,” expresses the fake expert. “Well that certainly doesn’t sound encouraging,” the fake reporter says.

“What do you mean exactly?”

“Angie, it means it could be a very dark winter for America,” the man says.

Near the end of the scenario, when all hell has broken loose, the exercise deals with having to impose martial law in the US, details of which are described in the Dark Winter script (pg. 28)

“Options for martial rule include, but are not limited to, prohibition of free assembly, national travel ban, quarantine of certain areas, suspension of the writ of habeas corpus [ie, arrest without due process], and/or military trials in the event that the court system becomes dysfunctional,” the scenario states.

Elsewhere in the exercise’s findings, which summarizes “lesson’s learned,” participants are warned, “Forcible constraints on citizens may likely be the only tools available when vaccine stocks are depleted.”

Given the nightmare scenario laid out in the war game simulation, let’s hope this wasn’t what Biden was referencing when he used the term.

Yet with nearly 20 years having gone by since those Dark Winter exercises, as Dr. Peter Vincent Pry had warned in this March of 2020 story at ANP, “we have seen this movie before, and are living through it now”. And as Dr. Pry asks us, with huge bucks spent on developing a response for a pandemic or bio-attack upon America, what happened to bio-weapon/pandemic preparedness? From Dr. Pry’s story before we continue.:

20 years ago, in 2001, Operation Dark Winter by the Johns Hopkins Center for Civilian Biodefense Strategies and Center for Strategic and International Studies simulated a biological attack on the United States, producing an excellent documentary “Dark Winter” about the wargame, that shocked and galvanized Congress to act.