COVID-19 Was the Tipping Point for This “New World Order”

Rachel’s note: On Wednesday, our colleague Jeff Brown held a special investing summit. And he made what could be the most profitable prediction of his tech career…

Now, he’s revealing how you could use what he discovered to create a million-dollar tech portfolio – from scratch. He’s even including the name of his No. 1 tech recommendation of the decade.

If you missed this free event, don’t worry. Just go right here to watch the replay.

Over the next decade, advances in technology will bring fundamental changes to our lives. In fact, they’ll dwarf all the progress we’ve seen since the great tech revolution of the late 1990s.

Everything will change. The ways in which we work… shop… sleep… eat… travel… bank… communicate… entertain ourselves… conduct warfare… manufacture… design… distribute… create… transact… and maintain our own health… will all be different.

Although we’ve seen radical changes in technology during the last two decades – streaming video, cellphones, the internet, miniaturization, etc. – these improvements are only incremental. In fact, they are just the foundation for technology-based changes that will be exponential.

We’re on the cusp of a new revolution. And those who act now will be the first to realize the extraordinary wealth these changes will bring.

What does “exponential” change actually mean?

In plain terms, exponential means that the larger the value is, the faster it’s growing. The growth compounds as it goes. We can see an example with a chart like the one below. Exponential changes grow quite slowly in their early stages. But when they reach a certain tipping point – the sharp “elbow” you see in the graph – they take off like a rocket. 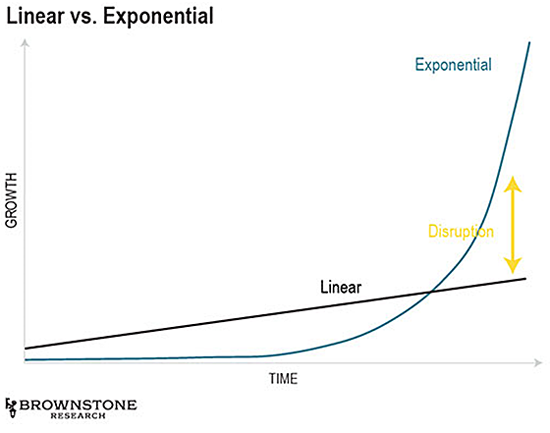 We face one main challenge as investors when trying to find companies on the verge of exponential growth, however. The early stages of an exponential change look the same as an ordinary linear change.

As an investor, we want to be in position just before the elbow.

Think of a company like Amazon. Amazon went public on May 15, 1997. At the time, its enterprise valuation was $438 million. It generated $147.8 million in revenue that year and a mere $2.7 million in free cash flow the following year.