The Crazed Will Burn It All Down After A Trump Re-election: Liberals Threatening Violence If Trump Is Reelected – It Is Prudent To Take The Threats Seriously And Prepare Accordingly

The Crazed Will Burn It All Down After A Trump Re-election: Liberals Threatening Violence If Trump Is Reelected – It Is Prudent To Take The Threats Seriously And Prepare Accordingly By Susan Duclos – All News PipeLine

While ANP has documented the violence of the group Antifa, as well as violent members of BLM, with Stefan Stanford recently detailingthe real dangers of the groups and the damage they are already causing here in America, we are noting that liberals not part of those groups (while still supportive of them) are also becoming more out of control.

With some apparently suffering some type of collective meltdown, and we take a look at what these people will do should Trump be reelected.

The people I am talking about here are liberals across social media, and offline at home, not activists, they don’t join protests (yet!). Generally they have been mouthing off at Republicans online, harassing and attacking Trump supporters, basically talking big.

I refer to them as liberals that talk big but rarely act, but over the past few weeks, they have seemingly become more unhinged, the level of which increasing each day as we approach the November 3, 2020 presidential election.

THEY DON’T EVEN BELIEVE THEIR OWN SKEWED POLLS

Maybe it is because they remember all the projections and predictions from pollsters and the media in 2016, all assuring Americans that Donald Trump didn’t have a chance to beat Hillary Clinton, right up until the end of election night when Donald Trump was announced the winner, but whatever the reason, the more the media screeches that Biden won’t lose, the more liberals are melting down, online and offline.

Note: It is worth reminding those that didn’t watch that  news pundits actually cried live, on-air, completely forgoing even the pretense of objectivity anymore.

Some have seen the video below, some haven’t, but it is perfectly representative of how shocked media personalities, pundits, comedians and celebrities all freaked out on television, because they too had believed the pollsters who were almost all wrong, and allowed themselves to become over-confident, assured that their candidate cannot lose.

Plus, I just get seriously entertained every time I watch it.

The media then spent four years hostilely covering the president with anonymously sources stories that were later shown to be wrong, or as we like to say “fake news,” while blatantly acting as the propaganda arm of the Democrat party.

That over-confidence of not only the media, but Democrat politicians, Hillary Clinton voters, and liberals across America, is exactly why we do not “promise” “guarantee” nor assume that we can predict that Donald Trump will definitely win reelection.

With that said, a look at liberals once again citing “the polls” with claims that Joe Biden is almost guaranteed to be elected as president in November,  yet becoming more crazed day by day as the election approaches, shows a major disconnect with the confidence they claim to have.

Even before the whole scandal involving Hunter Biden (Joe’s son) and Joe Biden himself, we noticed how weird (more than usual) that liberals were acting, especially for people so sure the polling information is right, and perhaps that itself can be explained by Biden’s campaign itself, warning supporters that the internal polls are not quite matching the public polls, as Biden is not as ahead of as Democrats want to believe.

A few questions need to be asked.

Why is social media overtly trying to interfere in the election by suspending the New York Post for their Biden bombshells?

Why are are Democrat politicians screaming about “Russian Disinformation” while not once being able to dispute the incriminating emails, pictures and letters found on Hunter Biden’s computer, are indeed his?

Why has Joe Biden gone into hiding, calling a lid (no more public appearances) for the week?

Why are liberals online absolutely having public meltdowns, screaming and screeching on video?

The one question that encapsulates them all is “Why are Democrats/Liberals/Media panicking now if they are so damn sure that Joe Biden is ahead and will win in November?

Answer: They are running scared and incapable of hiding their terror. 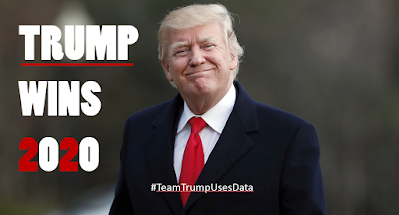 THE CRAZED WILL BURN IT ALL DOWN IF TRUMP WINS

With all that said, and while we in no way would even attempt to guarantee a Trump win, or loss, because no one can predict how an election will turn out, we must look at the violence we see now, like a young female Trump supporter attacked at the Women’s March and beaten to a pulp (Link here), and be very prepared for crazed liberals to completely lose their minds if the image above becomes true.

What we have seen in Trump’s first four years, by media and Democrat politicians, online celebrities and liberals, violence by different groups throughout the last few years, the freakouts, the meltdowns, the attacks against Trump supporters, will all pale in comparison if liberals on the very edge feel like the media lied to him about Biden’s chances once again.