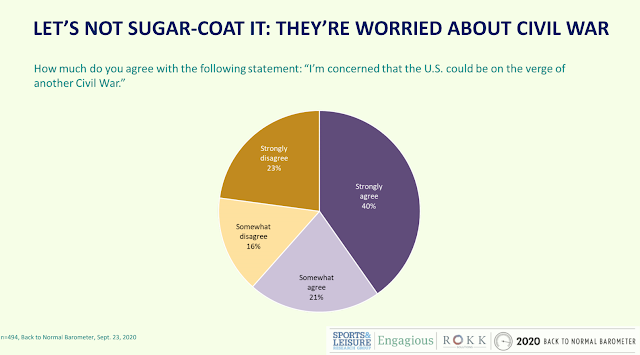 Civil war, social unrest, fears of a COVID-19 resurgence, are among topics that no one wants to see actually happen, and those that do,  such as violent Antifa groups, simply do not understand that attempting to attack or “go to war” with tens of millions of armed Americans, is a sure way to end up six feet under.

With that said, the silver lining in 61% of Americans seeing the possibility of civil war happening after the 2020 presidential election, is that a majority of Americans do see what is happening, despite the medias best efforts to downplay the riots and violence being noticed all across America.

An even better piece of news to those of us that have been pushing people to prepare for civil war, or at least the potential of the “cold” civil war we are seeing turning hot and even more bloody, is that 52% of Americans surveyed say they are “Stockpiling In Anticipation Of Disruptions.” 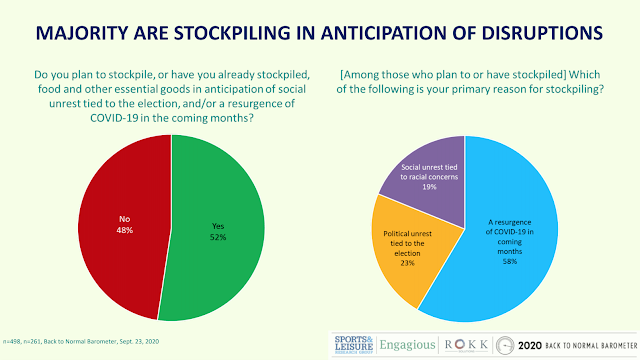 Even with those silver linings, the actual breakdown of those that are stockpiling and preparing, are more worried about a “resurgence of COVID-19,” than political or social unrest either stemming from racial concerns or political unrest tied to the country.

A majority of Americans are bracing for the possibility of a politically-fired civil war, and more than half are already stockpiling food and other essential items to survive and fight back, according to a new survey shared with Secrets.

In the survey, 61% said that the United States is nearing a second civil war, including a shocking 41% who “strongly agree” with that assessment.

And 52% are so convinced that it is just around the corner, or after Election Day, that they are putting away food and other essentials, an historic expansion of the prepper movement that has been brewing for years, now driven by fear and coronavirus-induced shortages.

Granted, after seeing the panic shopping, empty grocery shelves, limits by stores of how many of certain items customers are allowed to buy at one time, during the initial months of the COVID-19 pandemic, it is totally understandable folks would rather stock up a little earlier than they did last time, so they do not run into empty shelves.

On the flip side of that coin we note a definite increase of Americans are stockpiling and preparing for unrest as opposed to COVID-19, which means Independent Media is bypassing the MSM and getting the message across to normal everyday Americans, that the empty shelves from supply chain issues due to COVID-19, is nothing compared to the type of “supply” issues the entire nation will see if the country devolves into a full-blown and bloody civil war. 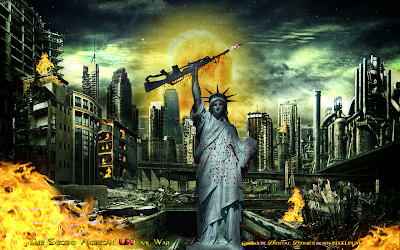 There is a huge difference between a short lived shortage of certain foods and supplies that will get restocked once the initial freakouts are over, and long term shortages due to civil unrest, riots, and/or civil war.

With the former the shortages have an end date, a specified amount of time before companies think they can get the supply chain functioning again, and with the latter scenario, once food disappears from the stores, we may not see restocking happen for months, or even years depending how long it takes for the physical fighting to end on the streets.

Then we won’t just see the race and socialist riots we have been seeing over the last few months, but then the food riots begin, where it isn’t just certain groups rioting for some social or cultural issue, but total anarchy as hungry Americans literally fight for food to survive.

Advanced preppers, those that have been preparing for any potential disaster or disruption or social unrest, for months or years, are far ahead of those just beginning or just starting to take the dangers seriously, but with advice from those with experience, whether with gardening to grow their own food, or stockpiling, these “new to prepping” folks can at least catch up enough to be in a position to survive for longer than they can right now should all hell break loose.

Newcomers to the prepping world will be looking for that advice, so we encourage our readers, many of them preppers themselves to some degree, to offer their insights, tips, links and resources, in the comment section.

In the video below published on September 28, 2020, we see the monetary damages broken down per city and state, we get a very good look at the damage and chaos we are watching now in liberal cities across the nation, along with images of some serious devastation.