Biting Off More Than They Can Chew: All Bets Are Off Now As Media Personalities, Democrat Politicians and Hollywood Names Lead The Violent Charge Against Conservatives

Biting Off More Than They Can Chew: All Bets Are Off Now As Media Personalities, Democrat Politicians and Hollywood Names Lead The Violent Charge Against Conservatives By Susan Duclos – All News PipeLine

On Saturday we discussed the preliminary, early reactions to the death of Supreme Court Justice Ruth Bader-Ginsburg and predicted things were about to get a lot more insane.

It appears that was an understatement of major proportions, as it is not just two days later, and we see media personalities, Hollywood “celebrities,” liberals across the internet and Democrat politicians all using rhetoric and threats in a manner that is seriously inciting crazed liberals across the country into open talk of violence.

Sure, Antifa, BLM and liberals have been rioting for the last few months, but after polling showed the riots were backfiring against Democrats, we stopped seeing coverage of the riots that media called “mostly peaceful protests,” and a slackening of the riots themselves, because word went out, they were hurting their own party.

Well…. all bets are off now. 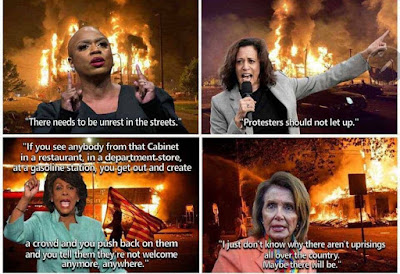 LIBERALS READY TO BURN IT ALL DOWN……AGAIN

We know, pretty much everyone knew, that should Ginsburg pass away before the 2020 election, liberals were going to lose what was left of their minds, thinking some would calm a bit after the shock had worn off, and would start strategizing.

We apparently gave them too much credit as the reaction has gotten significantly worse since Friday night when her death announcement went out.

They have acted like spoiled children, having a major 4-year long temper tantrum, and shown to be willing to watch the nation burn because they cannot handle losing.

Alexandria Ocasio-Cortez, or as I call her, the bimbo from New York, is using Ginsburg’s death to call for liberals to become “radicalized.”

I refer readers to the image above where Democrat politicians have already been there, done that, and found that it polled very poorly, for the party itself.

After documenting liberals over the last few years, that ship seems to have already sailed.

There is no shortage of the politicians encouraging protests, riots and “radicalization” in a useless attempt to stop the nomination by President Trump, and the confirmation by the Republican controlled Senate.

Now we see media personalities, those that should be objectively reporting the fall out from Ginsburg’s death, instead calling for “street protests.”

Jeffrey Toobin, legal analyst for CNN, calls Democrats weak, wimps for not being more aggressive towards Republicans, and says the party should encourage “street protests” from their activists.

Sally Kohn, who regularly appears as a political commentator on CNN, took to Twitter to declare “If Mitch McConnell wants a fight, he’s gonna get a fight.”

After Chris ‘Fredo’ Cuomo’s threatened to throw some guy down a flight of stairs for calling him Fredo, it seems almost natural for CNN to be in the forefront of spewing violent rhetoric, which in turn incites liberal followers.

As ANP reported on Saturday, former CNN personality, Reza Aslan, replied to Senate Majority leader Mitch McConnell’s statement saying he would be holding a vote to confirm President Trump’s new nominee to the Supreme Court, by saying “Over our dead bodies. Literally.”