America Has Been Cast Into A Dystopian Horror Movie And If Democrats Have Their Way, The Worst Is Yet To Come

America Has Been Cast Into A Dystopian Horror Movie And If Democrats Have Their Way, The Worst Is Yet To Come By Stefan Stanford – All News Pipeline

– Western Nations Across The Planet Are Falling To ‘Coronavirus Tyranny’

While Covid-19 has largely fallen out of the front page main headlines of many mainstream media outlets with the buildup to November 3rd here and the fight for the next US Supreme Court Justice gobbling up much of their top billing, we absolutely have to keep our eyes on this so-called ‘planned-demic’ with one so-called ‘Western nation’ after another seeing their ‘liberties’ falling to ‘coronavirus tyranny’.

With a supercomputer now deciding the politics of Australians, where the wealth and liberties of millions are being plundered, while a new pre-crime law would give Australian authorities the power to arrest ‘Covid-19 conspiracy theorists’ who go against what the country dictates if police there merely THINK that a person MIGHT commit a crime (such as not wearing a mask) in the future, Zero Hedge reports:

“If there is one thing that terrifies increasingly tyrannical governments, it’s a loss of control of the narrative, which is why the Australian government is getting a jump start on curbing any so-called “conspiracy theorists” daring to spread information that questions the fear-mongering being used to keep Aussie citizens under lock and key.”

And while such moves being made by formerly free nations reminds many of what’s already happened in Communist China, where people were welded inside of their own homes merely if other residents of their apartment complexes had tested positive for the virus, we don’t have to look too far here in America to see some of the same kinds of moves being made.

As Paul Joseph Watson reported in this recent story over at Summit News, while Australia has become the most authoritarian state in the developed world when it comes to the draconian enforcement of COVID rules, other ‘formerly free’ Western nations aren’t too far behind. From Watson’s story before we continue.:

A draconian new coronavirus law could give Australian authorities the power to arrest coronavirus “conspiracy theorists” if it’s thought they may commit a crime in the future.

The new COVID-19 Omnibus (Emergency Measures) bill, which is being debated in the Victoria State Parliament this week, will give local authorities the power to detain people who refuse to self-isolate as well as “conspiracy theorists” and anyone deemed to be at risk of spreading COVID-19 negligently.

A government spokesman told the Age that the measures “could be applied to conspiracy theorists who refuse to self-isolate or to severely drug-affected or mentally impaired people.”

Those detained will be held in quarantine facilities.

So with what is happening now in Australia, New Zealand, the UK, Canada and other Western nations a very loud and clear warning to Americans, the mad-rush which Bill Gates and the globalists are now taking to develop a ‘one-shot-to-rule-them-all’ Covid-19 vaccine is just one of the things we should all be keeping our eye upon as an incredible timeline of events unfolds between now and January 2021. 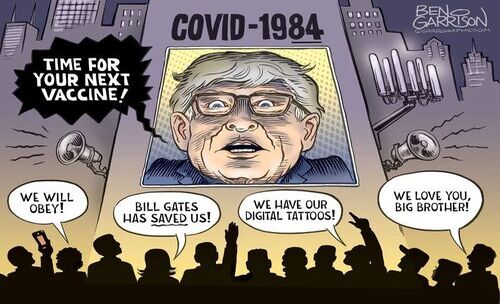 As Mike Adams over at Natural News had pointed out in this story, between this ‘pandemic’ and the vaccines that are being created to ‘deal with it’, the sudden death of RBG casting SCOTUS into disarray, our election day just over a month away and a 4-year-long Democrat insurrection that has been pushed on by politicians in Washington DC, sending all of our enemies overseas a very bad message about how America deals with sedition, no one knows how this will all play out in the long run.

Warning that Democrats will NEVER concede this election, even if President Trump is winning by hundreds of votes in the Electoral college on election night, as we’d pointed out in this September 20th ANP story titled “As The Clock Ticks Down, This Nuclear Election Script Has Been Written And Is About To Be Unleashed Upon America, With Nothing Less ‘Total Chaos’ The Democrat End-Game If They Don’t Win”, imagine a contested election that goes to SCOTUS and a 4-4 tie emerges. What happens then?

With Adams also warning of the absolute madness we’re sure to see coming from Democrats in the coming weeks and months as the Supreme Court battle heats up, as Susan Duclos had pointed out within this September 19th ANP story, if we thought things were insane before, we haven’t seen anything yet.

As Axios recently reported in this story saved over at Archive.com, Democrats are considering an ‘armageddon option’ that will consist of ‘total war’ if President Trump tries to get a Supreme Court Judge onto the bench who Democrats don’t ‘approve of’ so politically, things are turning red-hot right on time for Democrats-globalists who’d love to see America locked down like Australia.

And while here in America, Democrats go to war against the police and ‘law and order’, as Paul Joseph Watson had also pointed out previously in this story at Summit News, should the Democrats-globalists get their way, America by 2021 won’t look anything like the America we grew up in. From that story.

Police have the power to enter people’s homes without a warrant and also snatch children. Earlier this month, a pregnant woman was arrested in front of her children for posting about an anti-lockdown protest on Facebook.

Numerous people have been violently arrested for not wearing a face mask on the street, while journalists have also been arrested merely for covering anti-lockdown protests. Street markets have also been raided and shut down by riot police.

Now police merely have to suspect that you could commit a crime in future in order to carry out detentions and arrests.

And there you were thinking the Minority Report was just a dystopian sci-fi movie.

We’re living in it.