How Life Changed During the Pandemic: Still Loaded with Stimulus Cash, Americans Went Shopping. But Where?

How Life Changed During the Pandemic: Still Loaded with Stimulus Cash, Americans Went Shopping. But Where?

Total retail sales in August inched up by 0.6% from July, to a new record of $538 billion (seasonally adjusted), according to Census Bureau data this morning. It was the second month in a row of only slight upticks, after big bounce-backs in May and June, from the plunge in March and April. Compared to August 2019, total retail sales were up 2.6%, not adjusted for inflation, with large differences in various categories, from restaurants to auto sales, and we’ll get to those in a moment: 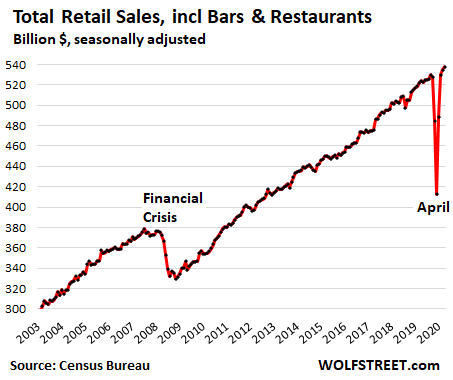 Consumers received the stimulus checks of $1,200 per taxpayer and $500 per child, starting in April, and those who were on state or federal unemployment insurance received the extra $600 a week in federal top-off money, which expired in July, and now many of them are receiving the extra $300 a week that started in August.

But the extra $600 a week and now the extra $300 a week don’t necessarily arrive one check a week. There has been a backlog in processing these claims, and suddenly consumers receive lump-sum payments to cover weeks of claims. For example, California started sending three of the $300-a-week in extra money as $900-lump-sum payments starting on Labor Day. Recipients might not get any unemployment for weeks, and suddenly they get a catch-up payment of thousands of dollars.

And what did they do with it? Similar to the stimulus money in April, many people used these funds to pay down their credit card balances and other revolving credit, which have dropped by nearly 10% from February through July, including the biggest plunge on record in April when the stimulus checks arrived. Credit card balances are now back to levels first seen in 2008: