While all of the evidence indicates that Democrats/globalists are working to unveil a ‘global police state’ with Covid-19 the ‘vector’ for its unveiling as Brandon Smith warns in this important new story over at Alt-Market.com, the more than 390 million guns owned by law-abiding Americans, (with more guns in America than people!), hint why it’ll probably get very ugly in America before they can accomplish their tyrannical goals of completely transforming our nation into just another ‘cog’ in their ‘wheel of tyranny’.

With the 2nd Amendment of the US Constitution created by America’s Founding Fathers, not for hunting but as an insurance for the American people against our nation fallen completely into tyranny, the fact that most other Western nations are now falling to ‘medical tyranny’ is of great concern, especially considering the implications.

As Skywatch TV reports in this new story, in a move right out of George Orwell’s “1984”, New Zealand has announced it would put all COVID-19 patients into mandatory quarantine camps. Warning within their story that the Prime Minister of New Zealand has said “each and every activity will be monitored in these camps and those that refuse to be tested would be forced to stay in the camps for a longer duration”, their story also asked of mandatory Covid-19 quarantine camps: “American next?”

And we learn of all of these tyrannical moves being made by Western nations in the name of ‘security’ at the same time as the UK has announced “Operation Moonshot” and their bid to test EVERY resident of the UK within a week’s period of time, a massive undertaking that will cost the nation over 100 million pounds (over 128 million in US dollars!)

And Susan Duclos was just recently sent an alarming email from a friend of hers and ANP reader who lives in the UK and who warns us that nothing less than ‘germ warfare’ is going on there as illegal immigrants from across the world are rushed in and provided for while homeless Veterans are sleeping on UK streets.

Hi Susan, even the sheeple are getting worried because even though the general stats for the virus are right down, they’ve stepped up the lockdown – & they’re putting Marshalls on the streets!

We’re being inundated with Muslim illegal immigrants aged 18-35 travelling across the channel from France & the Government aren’t doing anything about it. They’re being put up in 4-star hotels with 3 meals a day , translators, £40 a week & mobile phones, while homeless ex-soldiers are sleeping on the streets with no help. And now covid-infected immigrants are arriving, which I said would happen. It’s germ warfare.

Some cities are on lockdown in Asian areas because they’ve completely ignored lockdown all the time.

A few weeks ago hundreds of Jamaican had a rave on a Sussex beach, illegally parked, openly taking drugs, deafening music all night, etc & beat up 4 police. I wonder what the Marshalls would do then?!

Yes, it’s what we’ve all been afraid of for years; complete control of us all. 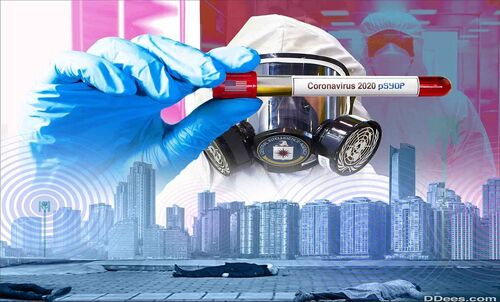 With 5 police officers in Australia recently swarming 2 elderly women who were sitting on a park bench without their ‘tyranny masks’ onshowing this is ‘medical police state unveiling’ is happening not only in New Zealand, the UK, Canada and the US but most ‘Western nations’, as this Alt-Market story warns, we’ve seen this story unfolding far too many times before throughout history. From Brandon Smith’s story before we continue.:

There is always an excuse for the enforcement of totalitarian restrictions on the public. There is always a reason. And, often these reasons are engineered to sound logical and practical at the time.

In Germany after WWI and into the early 1930s Bolshevik activists and the German Communist Party (KPD) engaged in aggressive economic sabotage, street violence and even assassinations. This along with the Great Depression led to German middle class support for the National Socialist Party and the Third Reich (fascism). Much of history’s focus is on the horrors of the Nazis, but many people are unaware of the extreme threat of communist revolution in Europe during this era, a threat which was used by the Nazis as a perfect rationale for constructing a police state. Arguably, without the existence of hardline communism, the fascists never would have had the public support needed to rise to power.