KENOSHA KYLE, THE MCCLOSKEYS, AND STANDING AGAINST BARBARISM

KENOSHA KYLE, THE MCCLOSKEYS, AND STANDING AGAINST BARBARISM by Tho Bishop for Mises

Last week we once again saw far too common sights of small businesses being burned to the ground and unarmed civilians being beat in the street. The epicenter this time was Kenosha, Wisconsin, where rioters and looters from around the area joined protesters in the city outraged by the police shooting of Jacob Blake. Kenosha was by no means the only terrorized community in recent days, however, as Twitter timelines have become filled with scenes such as renewed looting in Minneapolis, mobs threatening restaurant patrons in Washington, DC, and businesses destroyed in Denver, Colorado.

While the destruction of the American downtown is nothing new to 2020, the sense of escalating violence—coupled with rising concerns about the impact the unrest is having on Joe Biden’s polling numbers—is starting to change the way the media is framing these incidents.

As is usually the case with the corporate press, the framing is fundamentally dishonest.

For example, after an aggressive campaign by Democratic politicians, the media and even corporate giants trying to demonize Kyle Rittenhouse, the seventeen-year-old who shot three individuals attacking him in Kenosha last week, the shooting of a Trump counterprotester in Portland over the weekend has the media focused on equating the two events. The underlying theme: the street violence is Trump’s fault. Joe Biden, who once equated members of the Tea Party movement as “terrorists,” is now very concerned about inflammatory political rhetoric.

Of course, the two incidents are similar only in the fact that both ended with a death. Thanks to the widespread dispersal of cameras in the form of smartphones, we have footage of both incidents. 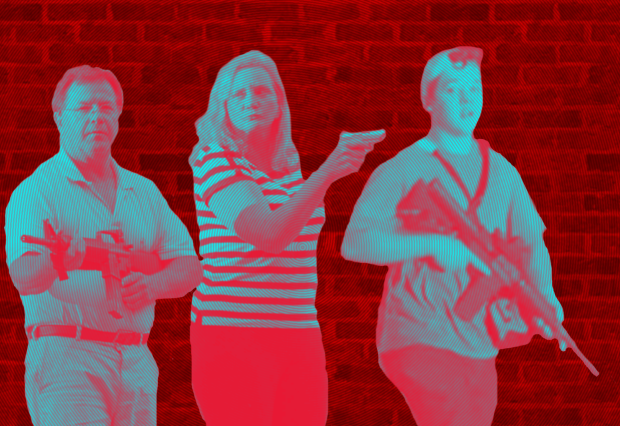 In the case of Kyle Rittenhouse, we know from photos, interviews, and footage that he was in Kenosha to assist in cleaning up graffiti and protecting businesses that had been victimized in prior nights. At a time when government police had largely abandoned their duty to protect taxpayers, instead focusing on the preservation of state buildings, it is inevitable to see the mobilization of armed private individuals filling the role of property defenders.

It is unfortunate that while assisting in this role Rittenhouse ended up taking the lives of others. However, we can vividly see two of his victims aggressively attempt to attack him while on the ground after being chased. The first victim can be seen chasing him and throwing objects, followed by another who fires a handgun, though the shooting itself does not appear to be captured on camera. Witnesses claim the victim attempted to grab Rittenhouse’s gun, while video before the incident shows a heated confrontation between the first victim and a group of militia-styled individuals who were apparently asked to defend one of the many businesses that had been attacked in the prior nights. What’s truly remarkable is that Rittenhouse was able to avoid wounding any bystanders while defending himself during this incident.

The case in Portland, on the other hand, appears to be quite different. The counterprotests by Trump-supporting groups appeared aimed to simply antagonize and attack those in the city who have been confronting local authorities for the last several months. According to those on the scene, and supported by video, the victim appeared to fire mace at the shooter before his death. This street violence was perhaps inevitable given the months of disorder in a hyperpoliticized environment. Whether it leads to any changes in the city is yet to be seen.

These, however, are not comparable incidents. The attempt to conflate the defense of property with tribal street violence reflects the anticapitalist bias of the modern zeitgeist.

Featured videos from the Mises Institute. The Mises Institute promotes Austrian economics, freedom, and peace in the liberal intellectual tradition of Ludwig von Mises through research, publishing, and education.