Volatility continued this week as gold and silver consolidate. Early Thursday, Fed chairman Powell, essentially said that the U.S. would allow for considerably higher consumer price inflation rates for longer period of time. We will get consumer price inflation at some point in the near future but this time around the U.S. isn’t structurally sound enough to pull another Paul Volcker. These words from the chairman should have helped the metals, though this is more of the same from Powell of late, and might have already been priced in. Mining equities also continue to be very volatile, which has and should continue provide opportunities (for a bit longer at least).

It is important to understand, especially those investors who are newer to the sector that even if gold and silver prices drop a bit to say $1,800/oz and $23/oz., the mining equities will still go up as the implied old and silver prices in the valuations of many mining stocks are $1,675-$1,750/oz. and $20-$21/oz. I’m still of the belief that gold and silver prices could correct further, looking for gold to go as low as $1,825-$1,860/oz. and silver to $20-$22/oz. before we begin the next leg higher, although this would have to happen sooner rather than later just because there are so many potential catalysts for the precious metals. At this point, the biggest risk to the miners Is on the upside so it’s best that most are near fully invested (>75%).

For the second consecutive week, it was mostly a quiet week in mining. Given the much-improved equity markets, though still quite undervalued, there continues to be more equity raises, especially among juniors, just not to the degree in which we saw financings over the last three to four weeks.

Artemis Gold; Announced the closing of the acquisition of the Blackwater Project from New Gold. Artemis now holds a 100% interest in the project. The total purchase price for the project includes: I) An initial $140m payment (now paid); II) 7.407m common shares of the company at a deemed issue price of $2.70/share (which has been issued to New Gold); III) A $50m cash payment to be paid one year following the close of this deal; and IV) a secured 8%/4% gold stream with on-going per ounce payments equal to 35% of price quoted by the LMBA two days prior to delivery. The company also published a revised PFS for the project. Instead of incurring approx. $1.3-$1.4B of initial capital invesmtnet, the PFS envisions a smaller-scale startup, following by two expansions, such that Artemis needs to only incur $600m of initial cap-ex, followed by $425m for phase-II, and $400m for phase III. On-going cash flow generation will greatly reduce the financing needed to build the project and complete the expansion. Using an $1,800/oz. gold price, the NPV5 and IRR are significant at $3.05B and 42% and using a $2,050/oz. gold price deck, the NPV5 and IRR increase to $3.825B and 50%. Once the expansions are completed, this will be a 20mtpa operation. 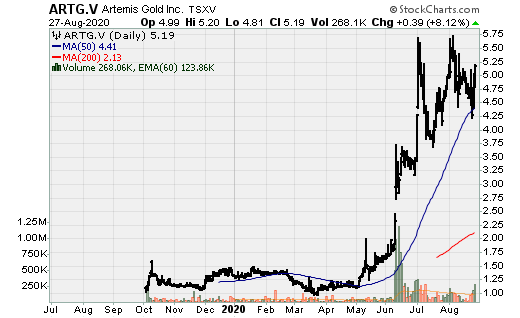 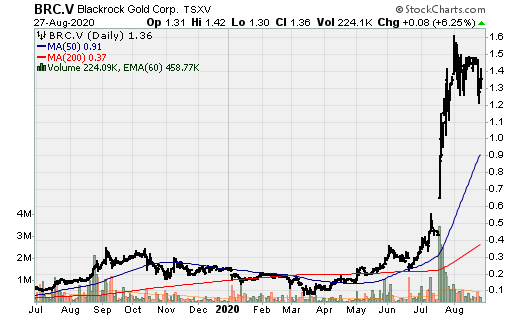 Caldas Gold: The company both announced the term for its private placement offering of up to $90m of subscription receipts and closed the offering two days later, totaling $83m. Each subscription receipt will convert into one unit comprised of one senior secured gold-linked note in a principal amount of US$1,000 and 200 common share purchase warrants of the company. Each warrant will entitle the holder thereof to acquire one common share of the company, at a price of CA$2.75 per Warrant Share until July 29, 2025. 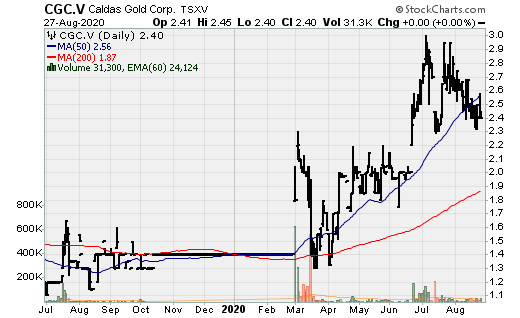 Fiore Gold: Reported its FY Q3 2020 operating and financial results. Q3 gold production was a record at 12.76k oz., the second successive quarter of record output. The company generated $10.5m in operating cash flow on revenue of $22m. The company boosted its cash balance to $17.3m, an increase of $8.2m relative to the previous quarter. The next potential catalysts for the company would be the advancement of its Gold Rock project. On May 19th, 2020, Fiore announced a 2m oz. M&I resource at its Golden Eagle project in Washington state.