The George Soros ‘Color Revolution’ In America Is In Progress

A recent unscientific poll by Poll King, which emails one political question a day to tens of thousands of subscribers, addresses the question of “Is George Soros behind the recent protests and riots?”

While we rarely take stock in exact numbers and use polling to find trends and patterns, the results of this one were just too astounding to go unreported.

The most interesting part of the poll, the pattern, is the breakdown between political affiliation where even 89.5% of Republicans answered yes, while a whopping 76.5% of Independents agreed that George Soros is behind these riots, and even 37.9% of Democrats see Soros’ hand behind the strings controlling groups like Antifa and a certain violent faction of Black Lives Matter.

Another interesting aspect is that men and women appear to be on the same page in regards to Soros’ being the puppet Master and the money man behind these coordinated protests.

The reason I find this poll so fascinating is that just a few short years ago, many Americans knew nothing about George Soros, nor his interference in multiple countries, causing riots, and revolutions and destabilizing the entire nation he has chosen to destroy.

Now, many, many more are awakened. Perhaps not enough, but seeing people wake up from their MSM induced ‘zombiism’ is rewarding in and of itself.

SOROS KNOWN FOR HIS ‘COLOR REVOLUTIONS’

The clearest description of a “color revolution” was found at the American Sun, by R. Landry,  stating that according to foreign sources, a color revolutions “are externally fueled acts with a clear goal to influence the internal affairs that destabilize the economy,[2] conflict with the law and represent a new form of warfare”.

Cutting through the verbiage, protests that begin over an event, which start entirely peaceful, immediately get hijacked by groups backed and funded by George Soros, which introduces the violence and rioting in order to attempt to force political change in the country being attacked by Soros puppets (in this case, Antifa and BLM).

In 2015, a piece over at SOTT, by Activist Post did a good job laying out examples across the globe of Soros’ handiwork and destabilization campaigns:

Soros is most well-known for playing a major role in the funding and facilitating of the “Bulldozer Revolution” in Serbia that overthrew Slobodan Milosevic in 2000, Georgia’s “Rose Revolution” of 2003, the 2006 push to move Turkey toward a more Islamist governing structure, and even the Occupy movement in the United States among a great many others – none of which brought anything other than greater misery, impoverishment, and police state mechanisms to bear on the general public. The Occupy movement, being the only exception, still brought nothing to its participants except the opportunity to burn off excess anger and energy along with a few cracked protester skulls. It was otherwise an incredible waste of time.

Regardless, the methods being used by the Soros machine in terms of the #blacklivesmatter and other related campaigns across the country are much the same as those used in Europe to usher in greater austerity, police states, and fascism through government-coup and social protest – i.e. a coordinated media campaign to provide the general public with a false perception of events as well as a false narrative, the use of social media and slogans, and the deployment of “swarming adolescents” in the streets.

See the top 5 color revolutions backed by George Soros over at Goulag Bound. 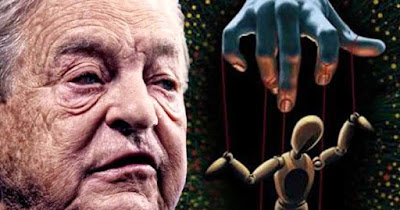 Antifa and BLM are not the only groups being incited, then aimed at a target by Soros, as his “foundations” have been linked, via funding, to many other groups where we have seen “mass protests,” such as the Woman’s March protest in January 2017 to protest president Trump’s inauguration.