Democrat’s Endgame Is Beyond Strange: With Dementia-Biden In Severe Mental Decline, The Plan Is To Get Him Elected But Never Let Him Assume The Duties Of President

Democrat’s Endgame Is Beyond Strange: With Dementia-Biden In Severe Mental Decline, The Plan Is To Get Him Elected But Never Let Him Assume The Duties Of President By Susan Duclos – All News PipeLine

Despite the Democrat party’s choice of Hillary Clinton to run against Donald Trump in 2016, even with public images of her unable to climb a small set of stairs and passing out and having to be carried into a van during a 911 memorial, just to name two out of dozens, the Democrat’s choice in 2020 is beyond just strange unless there is an endgame that does not include Joe Biden actually being the President, they are just using him to get a Democrat elected as President.

While Clinton was obviously physically unfit, she could still talk a good game, she was mostly coherent when speaking, even if at times she appeared drunk, Biden on the other hand, isn’t just a “gaffe machine” as he used to be, but is truly having a difficult time in forming a coherent sentence.

There was political chatter when Clinton suspended her 2008 campaign against Barack Obama that Democrat party leaders had promised Clinton the nomination following an Obama presidency, which at least explains why they “selected” Hillary as their nominee.

Not so with Biden. Democrats are using a man who is in a severe mental decline, to the point where listening to him has been described as “hard,” as social media users blast the Biden campaign, democrat party elders, and his wife Jill Biden, for not intervening and preventing further embarrassment.

That portion was missing from the clip put out by the GOP War Room, where Biden quite literally couldn’t pronounce the term mental fitness, while insisting he was willing for the public to judge his mental fitness. It took him multiple tries to get the sentence finished.


Democrats and Biden’s wife Jill should be ashamed of themselves.

Others have pointed out more in that interview and others over the last couple of weeks, all pointing to a dementia-like state as well as a huge dose of racism.

Make no mistake, it is not entertaining or amusing in the least to see an elderly man, suffering from memory issues, speaking issues, and cannot stay cohesive for the length of time it takes to get through a simple interview.

It is truly utterly reprehensible for the man to be used used for nothing more than his name recognition and the fact that liberal voters would collectively vote for a monkey rather than see President Trump serve for four more years because of their Trump Derangement Syndrome (TDS).

The campaign to hide the severity of Biden’s mental decline goes far further than just keeping him in his basement and limiting his exposure to voters as much as possible. The media, big tech and social media, are all playing their parts to “hide” any true news about it.

Do a search for the keywords “Joe Biden mentally unfit,” in either a search engine or an image search, and lo and behold the first articles and images are of claims that President Trump is unstable, or that Trump claims Biden is unstable, with no mention in the initial results of Biden’s decline itself. 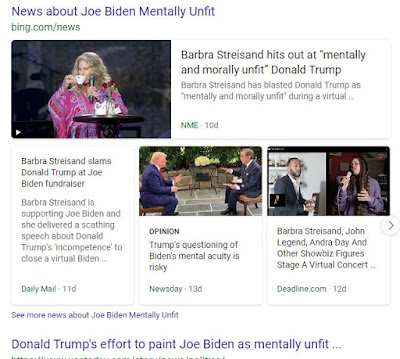 Another blatant indicator of them hiding the news from voters is that the first stories to pop up are 10 11, 12, and 13 days old!

Before getting into the democrat’s likely endgame by selecting Joe Biden, an excellent compilation video shows the incremental decline, where Biden has gone from just making “gaffes” in the past, to being unable to carry a thought to its conclusion, shown below.

The only thing progressing about Joe Biden, is his dementia……