The Magnitude Of Long Term Profits In A Gold Secular Cycle

The Magnitude Of Long Term Profits In A Gold Secular Cycle by Daniel R. Amerman, CFA for Gold-Eagle

Gold has recently been setting all time highs on a nominal basis and has broken the $2,000 an ounce barrier. It had been eight years since a new high had been set, and this is obviously an important event.

However, when compared to the magnitude of gold gains over a secular cycle, the recent price movements have been quite small in comparison to what history shows us could be on the way. To see why this is the case, we need to move from measuring the consistency of the price advantage that gold builds over stocks in a secular cycle, to the cumulative magnitude of the relative gains.

As we will explore, for two investors starting with equal assets, the historical norm is for an investor in the correct asset to have 2 times to 5 times the net worth of an investor in the wrong asset, within 3-5 years of a new secular cycle starting. This extraordinary degree of wealth creation/destruction is so large that it may seem improbable – but it is just what history shows us, and a swing in wealth of this magnitude occurred in all four of the secular cycles studied herein. 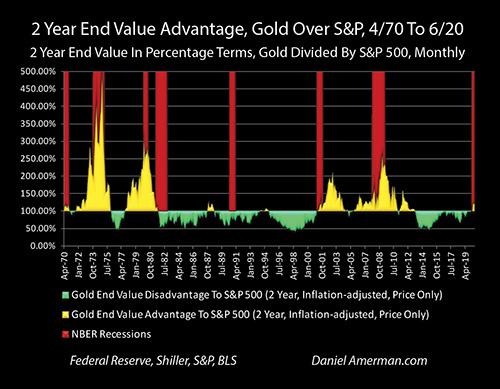 While very useful for identifying the contracyclical relationship and the cycles, the two year rolling comparisons do not show the very large cumulative advantage to one asset over the other, that builds over the long course of the cycle.

If we do indeed turn out to be beginning another long term (secular) cycle favoring gold over stocks, most of the gains do not occur during the first year, but instead steadily build over time. Each of the two year rolling averages effectively stack upon each other, and lead to a much greater magnitude to the advantages for one asset class over the other, for whichever is the ascendant asset class in that cycle.

To see the magnitude, we need to move from two year comparisons to looking at changes in value over the full course of the secular cycle, as measured from the first year of the cycle. A good historical example can be seen when we review the 1969 to 1980 cycle that favored gold over stocks in the graph below, with all comparisons being relative to the starting year of 1969.

This analysis is part of a series of related analyses, which support a book that is in the process of being written. Some key chapters from the book and an overview of the series are linked here. 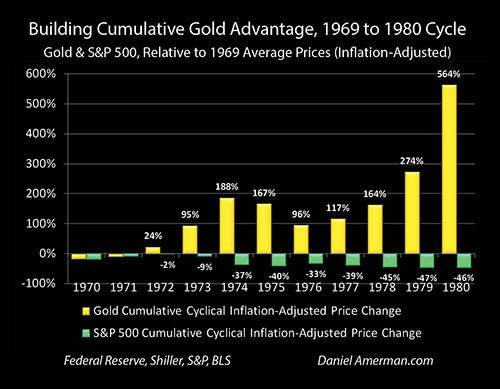 For 1970 and 1971 the asset classes were each slightly negative, and very close – on an inflation-adjusted basis. As developed in previous analyses, to properly see the cycles and the contracyclical relationship, the prices always need to be viewed on an inflation-adjusted basis. This is also appropriate because both gold and common stocks are considered to be inflation hedges over the long term, and whether the inflation hedge succeeds in practice or not can be of vital importance to long term investors, particularly in retirement.