Preparing For America’s Last Days With The 100 Day Countdown To Carnage And Mayhem Now On, America Already On Fire And Warnings Of More Turbulence And Chaos Ahead

Preparing For America’s Last Days With The 100 Day Countdown To Carnage And Mayhem Now On, America Already On Fire And Warnings Of More Turbulence And Chaos Ahead By Stefan Stanford – All News Pipeline 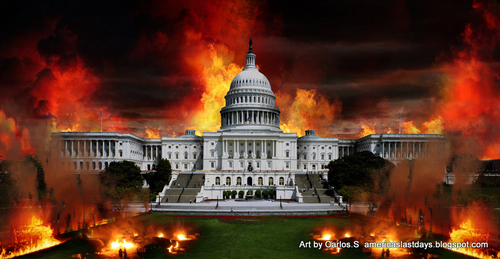 While the manufactured leftist riots and the financial carnage unleashed upon America by the Covid-19 lockdowns weigh heavily on many American’s minds, Michael Snyder over at The Most Important News recently detailed for us ‘the big picture’ we’re now facing in this story titled “We Are In The Process Of Completely Losing America”.

Warning within his story that our freedom of speech is being attacked as quickly and as dangerously as our religious liberty with the leftists war upon the Church and God now on full display as we charge towards November and the most critical presidential election of our lifetime’s, even the mainstream media warns what is ahead for America’s big cities seemingly no matter what road we travel down in the months ahead: fiscal gloom and doom with no answers in sight and now, 30 million Americans who were not getting enough food to eat just last week.

With a staggering number of US businesses also set to collapse in the months ahead, bringing down the hopes and dreams of millions more Americans, and for the 1st time since the Great Depression, millions of Americans forced to wait in long lines for the most basic and essential items, we’re going to be taking a look in this story at why we should all be doubling-down on our preparation in the days and weeks ahead. With ‘America on fire’ and many other events of today long ago warned of by people such as not only Pastor David Wilkerson but also a so-called mathematical genius who predicted 2020’s violence, chaos and the unfolding mayhem less than 10 years ago.

As ANP reader Tradisjonal Nordmann recently warned in a very wise comment on this ANP story:

Food is going to be problem for the whole world soon and it would be wise to start stocking up now, under the radar a few items at a time before the currently available stuff runs out without enough to replace it. Prices will sky rocket, where I live this year alone food costs are up 25-35 percent on what I usually buy. Grand solar minimum will influence climate -as will weather modification /covert weather warfare using patented tech and black military tech too. We are in for a rough ride no matter what even if there is no issue that could quickly miscalculate into a hot war with any other major player on the planet.

So we’ll be taking a look in the next section of our story below at numerous warnings from the past about what we now see unfolding in America while looking in the final section of our story at getting ourselves and our families ready for what could be a very difficult winter as we head into 2021. Especially if Joe Biden wins in November and the radical leftist agenda that we are now seeing being played out in cities across America be forced across the rest of the country. 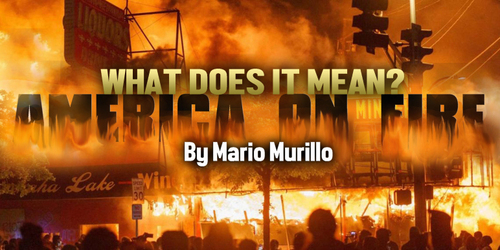 As we’ll see below, while Pastor David Wilkerson long ago warned of the events that we’re now witnessing unfolding with chilling accuracy, as this story over at The Sun from July 21st had reported, one so-called math genius also had warned of the events we’re now seeing today back in 2012 due to what he called ‘mathematical cycles’ that continually repeat themselves through history.

A MATH genius predicted violent “upheaval” events in 2020 eight years ago and now other scholars think his model was right.

The University of Connecticut scientist analysed history between 1780 and 2010 and claimed to find a trend of unrest around every 50 years.

Mathematician Peter Turchin concluded from his research that the US was in for upheaval in 2020.

He published his study in the Journal of Peace Research back in 2012, long before we knew about the global pandemic or the killing of George Floyd that resulted in worldwide protests.

Turchin argued that a 50 year cycle of violence occurs again and again in different countries all over the world.

He listed economic inequality as one of the problems that causes a surge in social issues.

After violent events, he said a 20 to 30 year rest period occurs with people trying to quell the violence before things bubble up again.

However, lots of academics have disputed this 50 year theory and don’t think there is enough historic evidence to prove it.

Turchin told Live Science: “The prediction [of violence] followed from observing the trends that make a violent upheaval increasingly likely — falling living standards for the majority of population, growing intra-elite competition and conflict.

“These trends didn’t go away and continue developing in unfavorable directions.

“This means that there will be more turbulence, driven by other immediate triggers.”

Jack Goldstone, a sociologist at George Mason University in the US, also told the publication: “The pandemic and police brutality this year acted as ‘triggers’ to unleash the pressures for violence that had been rising for some time

“What the model predicts is that the 2020s will be dangerous, and that unless the underlying pressures are reduced, the late 2020s and 2030s could be even worse.” The scientists don’t think violent cycles are driven by fate but by the way society reacts to challenges.

And Peter Turchin wasn’t the only person who warned of these days quite some time ago.

With America being transformed into a leftist banana republic worse than Venezuela should Joe Biden win in November just one of the potential ‘end games’ ahead of us, as Mario Murillo Ministries recently reported in this blog entry, Pastor David Wilkerson warned us of what was ahead for America with chilling accuracy just a few years ago. From that story before we continue.

Despair makes you set fire to your own neighborhood. Rage answers lawlessness with more lawlessness. Rioters have destroyed black-owned businesses—businesses the owners spent a life-time building.

The looters don’t want justice, they want free stuff—and many of them are white. Violent protesters aren’t honoring George Floyd’s memory. They are adding pain and grief—especially to the family George Floyd left behind.

Why is all of this happening to America? David Wilkerson didn’t just see New York City shutdown in one hour in his vision that many say predicted the virus. He also saw 1,000 fires burning in New York at one time. Are these riots all across America that next thing he saw?

From this entry over at America’s Last Days on Wilkerson’s warnings:

David Wilkerson had a series of visions and angelic visitations from the lord during his life time until his death in 2011, about the coming collapse of the U.S. economy and the destruction of America. In the economic collapse there will be riots and fires all across major cities in this nation. This will be a time of great apostasy and persecution in the church like never before. After the economic collapse of the United States the nation will be at its weakest point. A hydrogen holocaust will then sweep this nation in a Russian invasion of America.

And while much may seem bleak, and even more so should Joe Biden win the election and radical leftists fully take over and continue their persecution of Christians and their destruction of America and the rights guaranteed to Americans in the US Constitution, as the previously mentioned story over at Mario Muillo Ministries points out, there is actually a silver lining in everything we’re now witnessing in 2020 America.

Yet in all of this, there is good news. A core of godly praying people are standing between heaven and earth in intercession and repentance. There are preachers who are openly rejecting the criminal limitations that are being placed on their church. There are heroes rising up, and their numbers are growing every day.

It is a time of both great darkness and great light. It is a time when the Army of God will find their full authority and might—even as evil plunges the world into blackness. It is time for us to arise, and shine!

Arise, shine; for your light has come! And the glory of the Lord is risen upon you. For behold, the darkness shall cover the earth, and deep darkness the people; but the Lord will arise over you, and His glory will be seen upon you. The nations shall come to your light, and kings to the brightness of your rising (Isaiah 60:1-3).