Gold Still Has a Long Way to Run

When we came into 2020, mainstream stocks were flying: The S&P 500 was up 33% from the previous year, including reinvested dividends.

Gold was on the rise, too. But few investors were paying attention.

We all know what happened next. 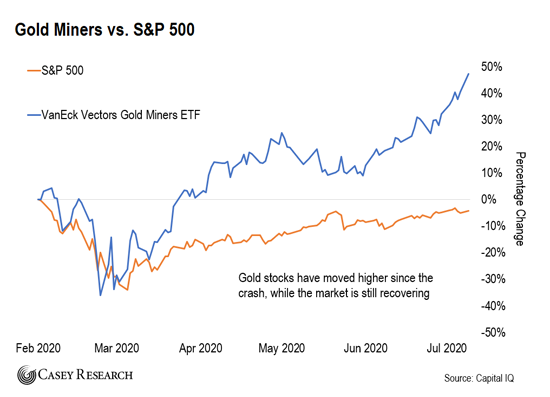 Since the corona-crash, large stocks have struggled. The S&P 500 is still below its February peak. But physical gold has recovered all its March losses and moved higher. Same with gold stocks – you can see in the chart above how the VanEck Vectors Gold Miners ETF (GDX), which holds a basket of major gold miners, is soaring.

True, the wider markets are also recovering. But recent resurgence in COVID-19 calls for caution on mainstream stocks. It also suggests gold could soar further on safe-haven demand.

There may be bumps along the way. If we get another massive market sell-off, gold and gold stocks will likely get hit, too – at least temporarily.

But news about COVID-19 resurfacing actually sent bullion higher. It reached a historic high of nearly $1,940 per ounce on Monday.

At that level, you might think you’ve missed the boat. But a look at the numbers shows otherwise.

Ratio charts pit one stock against another. They’re the closest thing we have to a crystal ball. We can use them to pit commodities against stocks.

They show this sector is still incredibly cheap – and in the first innings of a bull market.

Unbelievable but True: These Stocks Are Still Incredibly Cheap

The March crash in gold and commodities was a great buying opportunity. And there will be more drops like that…

But even with the massive rally in gold stocks over the last few months, the sector is still undervalued today.

Below is a chart I’ve shown you several times over the last few years. It’s a ratio of commodities (as measured by the Global Commodities Index, or GSCI) to mainstream stocks (the S&P 500).

Take a look at where we are now… 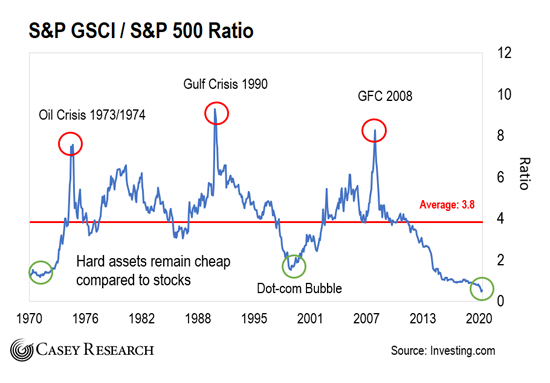 Last year, I was pounding the table that commodities were headed for a big move up. At the time, the commodities-to-stocks ratio was hitting all-time lows. Hard assets were exceptionally cheap, relative to other asset classes.