Investors are finally waking up to gold.

And it’s easy to see why. After years in the doldrums, gold is making headlines. It’s up about 24% so far this year, and it is nearing its all-time high of around $1,900 an ounce.

But mainstream investors are still missing the bigger story. Although gold is a great tool to protect your wealth, it’s tough to build a fortune just by owning gold.

However, gold miners are a great way to take advantage of a historic rise in gold – and they can deliver much larger profits than gold itself.

In fact, they’re crushing it this year. So far in 2020, the VanEck Vectors Gold Miners ETF (GDX), an exchange-traded fund (ETF) that tracks a basket of gold mining companies, has soared by 43%. In the meantime, the S&P 500 is up just 1%. 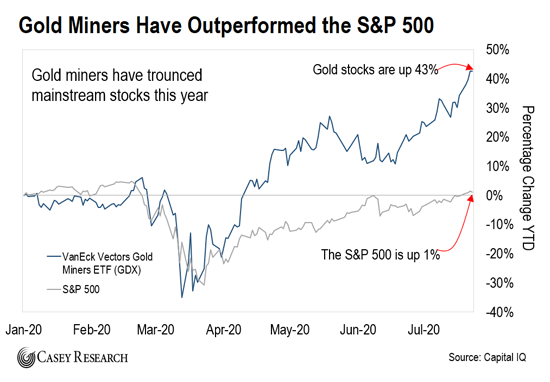 Now, looking at that chart, you might think that you’ve missed the boat on gold stocks. And mainstream stocks might still look attractively cheap in comparison, after barely recovering from the COVID-19 plunge in March.

But that’s not exactly true. Below, I’ll show you why gold stocks offer more bang for your buck than mainstream stocks… along with a method to play this sector as it soars higher…

The Importance of Leverage

As I told you last week, this gold bull market is just getting started. And gold stocks thrive during times like these – because of something called “leverage.”

Leverage is the relationship between the price of gold and the share prices of gold miners. When gold moves an inch, these stocks can move a mile.

Take it from Casey Report chief analyst, Nick Giambruno. He’s been helping his readers take advantage of this gold surge with miners. He recommended a gold miner in April and another one in May, and already, they’re up 78% and 43%, respectively.

And Nick thinks this is still the early stages:

… This gold bull may turn out to be the biggest one in history. That would take it far above its previous peak of around $1,900 roughly a decade ago.

As those of us who invest in resource stocks know, gold stocks offer leverage to the gold price. That’s the reason to own them. Even a minor increase in the price of gold can cause shares in these companies to skyrocket.

But that doesn’t mean gold stocks are finished. As the price of gold continues to rise, miners’ value will rise along with it.

The Value of Ratios

Even after their performance so far this year, gold stocks are still “cheap” buys compared to mainstream stocks.

But how do we know whether a stock is cheap or expensive?

Valuation ratios are a useful guide. They show how much “value” you get per unit of “price.”