Recovery of Collapsed Air Passenger Traffic in the US Backtracks

Recovery of Collapsed Air Passenger Traffic in the US Backtracks

Confirming early warnings by United and Delta of re-declining ticket sales. V-Recovery has to wait in line. Airline shares down 3.7% intraday.

TSA checkpoint screenings, which track how many people enter into the security zones at US airports on a daily basis, were down -72.6% yesterday (Sunday) compared to Sunday in the same week last year, according to TSA data released this morning. This was a notch worse than Sunday last week (-71.7%). And this reversal has been playing out since early July.

The seven-day moving average, which irons out the day-to-day volatility particularly around the Independence Day weekend, has edged down to -74.5%, right back where it was on July 2. The peak, so to speak – the smallest decline from the same period last year – was on July 8: 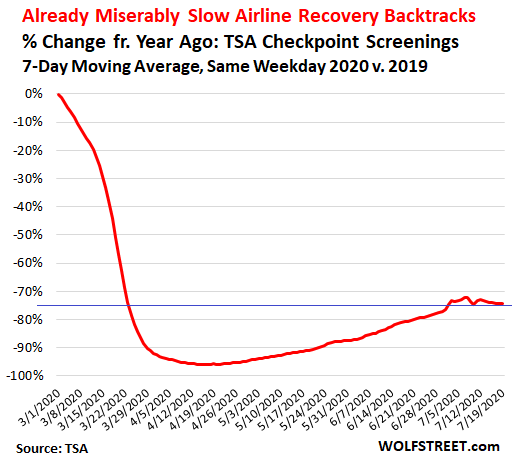 The miserably slow recovery for airlines in terms of ticket sales, from near-zero in late March and early April to some level above near-zero started backtracking in late June. United Airlines and Delta Airlines both issued early warnings about this industry-wide phenomenon that was not supposed to happen in this recovery, but is now happening.

Ticket sales today result in passenger traffic some days, weeks, or months later when these customers are actually walking into an airport to get on the plane. And those declining ticket sales that United had warned about with charts, using industry-wide data for all airlines and sales channels, is now translating gradually into declining passenger traffic into the security zones of US airports.

Sure, this is summer travel season, when traffic is always up seasonally compared to lower-traffic seasons. This year too, there has been a seasonal uptick. But these are year-over-year comparisons that eliminate the seasonality of air travel.

Both United and Delta cited the renewed outbreaks of Covid-19 as the primary cause for this reversal in the recovery – people not wanting to be in an airport with all the exposure this produces and not wanting to sit on a plane near people who might potentially be contagious. This is in addition to travel restrictions globally.