And the FANGMAN shivered as Netflix got knocked down.

A reversal of roles took place in the stock market last week: The “Giant 5” combined – Apple, Microsoft, Amazon, Alphabet, and Facebook – had a lousy week. And the FANGMAN, which includes Netflix and Nvidia, shivered. But the rest of the market rose. 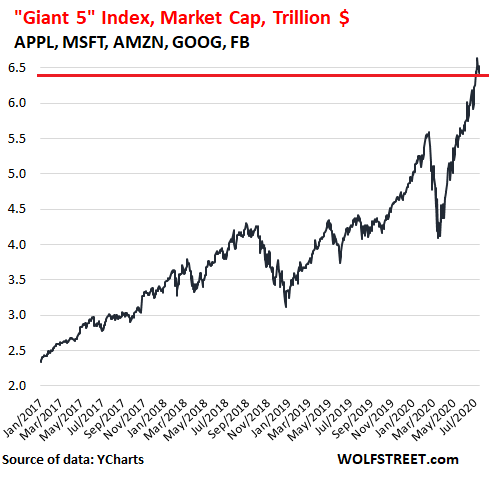 Four of the “Giant 5” fell during those five trading days. Only Apple ticked up a smidgen. The list shows the percent change over the week and the market capitalization (number of shares outstanding times current share price) as of the close on Friday:

How did the rest of the market do without the Giant 5?

Even as the Giant 5 had a lousy week, the total market, as measured by the Wilshire 5000, which includes all 3,415 or so stocks listed in the US, rose 1.6% over those five trading days.

This was a big move, but it still left the “Wilshire 5000 Minus Giant 5” 2.4% below June 8, and 8.6% below its peak on February 20. In fact, it’s up only 2.2% from January 26 of 2018, having been on a two-and-a-half-year wild ride to nowhere, and underperforming even a despicable savings account over the period, while whacking investors with a huge amount of volatility (Wilshire 5000 data via YCharts):