Major news in mining this week was the large number of announced and completed equity financing’s. Eric Sprott was involved in many of these. Gold and silver had another strong week but a consolidation period can happen at any time. It isn’t uncommon see retrenchments of 15-25% [in the mining equities], which could happen tomorrow or several months down the line but it will happen. Time will tell. Gold and Silver have massive tailwinds and there are countless potential catalysts in the second half of this year alone.

Alamos Gold: Announced it completed the lower mine expansion at its long-lived cornerstone asset, Young-Davidson in Canada. The company is in the process of transitioning from a period of high-capital investment to one where the company generates material free cash flow. In addition to higher-output and lower costs at Young-Davidson, low-cost production from Island Gold [and a Phase III expansion expected soon and elimination of 3% NSR royalty], recommencement of production from Mulatos [the 5% NSR royalty has ceased] and higher gold prices, will drive cash flow higher in the near-term. The company is waiting for its next growth project to get the go ahead, Kirazli, as $32m of the estimated $152m capital investment already spent. This is on hold for the time being as it is awaiting the renewal of concessions to restart construction. Alamos is working with Turkish department of energy and natural resources on securing renewal. Kirazli, when in production, will increase production by 100k oz. and have costs in the lowest 10% on the industry cost curve with AISC of $373/oz.

This will be followed by the Lynn Lake project in Canada [with a construction decision expected in 2022], which using a $1750/oz. gold price, has an IRR and NPV of approx. 30% and >$400m on avg. production of 170k oz. Au with AISC of $745/oz. Alamos could set itself up to become a senior producer [>=1m oz. p.a.] by 2023/2024 should it acquire an asset like Brucejack. Alamos trades with a premium NAV multiple relative to its size due to its cornerstone assets and a development project being in Canada. 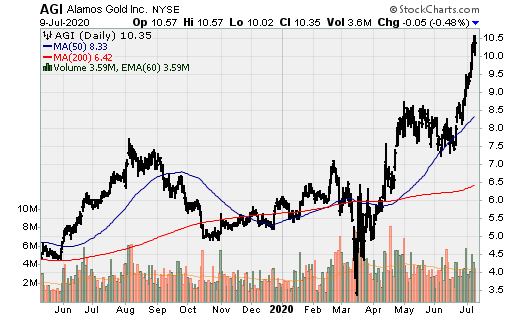 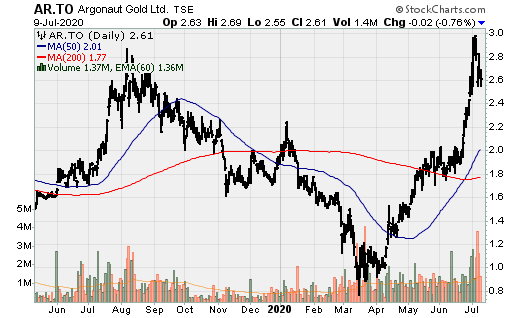 Caldas Gold: The company announced the results of the Pre-feasibility study (PFS) for the expansion of its Marmato project in Colombia. The PFS is similar to the PEA but production in during the peak years will be higher. In all likelihood, because both the upper mine and MDZ have significant exploration upside, production during the peak years will likely last a longer period of time. There is also material upside assuming the company can upgrade M&I and Inferred resources to reserves, which total 6.2m oz. contained, up from 5.35m oz. from the 2019 resource estimate. The current LOM plan is based on reserves of 2m oz. Au, and it is reasonable to expect both increased production and mine life extension.