A confluence of issues, including the shut down of states across America, contributed to the limitations in obtaining certain food items, or seeing signs explaining limits on meats, paper and a variety of other products.

During the initial phase of food and product shortages, some stores limited the amount of certain types of meats that one could buy, other sections were left dangerously light as readers told us of shortages of flour, cleaning supplies, toilet paper, hand sanitizers, and pharmacy items, just to name a few.

After ANP’s  “Back/Still in supply articles, we saw responses by email asking if we could help locate other items, because the local stores in those areas stopped carrying the items.

Those in areas that have not seen shortages, are few but lucky. 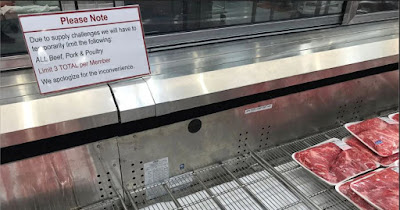 The COVID-19 pandemic has been blamed for the majority of these issues, but without a number of other events, the shortages would not have been so devastating that tens of thousands of Americans were hungry and had to obtain their food, not from grocery stores, but by lining up by the hundreds at food banks.

The media first acted like the pandemic was nothing, “move along now there is nothing to see here” and did not even warn their viewers/listeners/readers that they should stock up early, so they weren’t part of the mad rush later when the unprepared started panic shopping and emptying shelves, Independent News readers got a little bit of a head start and topped off the supplies they already had, or gathered some they knew they would need in the coming weeks.

The media then moved straight into “politicize” the pandemic mode, casting blame, pointing fingers, never at themselves for so misinforming the public originally though, and have spent the majority of their time attacking rather than paying attention to the more recent food supply developments,  or downplaying it all so they could get right back to politics (as if they cannot do both!), yet from what we are learning, a whole new set of food shortages are coming.

While the meat shortage have been affected by the shutting down of restaurants and schools, because when they stopped ordering large supplies, much had to be destroyed because processing plants were shutting down to handle infected employees, and couldn’t process the animals, that was not the only issue in play.

With the mid-west flooding which effected both farmers and ranchers, followed by an early freeze, in 2019, Independent Media encouraged their readers/followers to stick up, or resupply, or simply top off what they already had, because the following year (this year) was when the shortages would be seen and felt.

That was before the COVID-19 issue. That is why we didn’t just see a few empty shelves here and there, but signs like the one above, limiting consumers purchases because of a shortage of supply.

The media may have stopped, or slowed down on reporting about food issue, an election year tends to make them ignore anything but their own political activism, but the situation is still an issue, and it is getting worse.

June’s job reports were much better than expected, but since the lock down of states across America, tens of millions of people became jobless over the past few months, leaving many not knowing where their next meal will come from.

With states opening up again, the supplemental income being provided to millions of families is ending in August, which has food banks bracing themselves for even worse than what they have already been dealing with in terms of feeding the hungry.

Lines began to calm down a bit in mid-April as Americans started receiving their stimulus checks, as well as an additional $600 in weekly unemployment benefits, thanks to the $2.2 trillion stimulus package known as the CARES Act, Jocelyn Lantrip, communications and marketing director for the Food Bank of Northern Nevada, said.

Lantrip thinks the worst may be yet to come. More than 25% of Nevada’s labor force is unemployed, the highest unemployment rate of any state, and Lantrip said she’s “anticipating even higher need for food assistance in August” than at the onset of the pandemic. 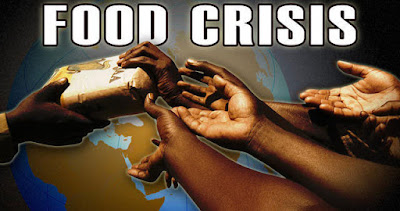 As some media has touched on the issue before burying it under a ton of political, culture war, and liberal activism,  we do have some randomly written informative pieces here and there, not enough to trend as top news, but enough to see that not only is the original issue not “fixed,” but what they will call a “new” food crisis is about to hit.

June 12, 2020: Meat prices are going up and grocers are putting limits on your purchases