Handgun Wounding Factors: A Caliber Effectiveness Guide for Self Defense and Body Damage

Handgun Wounding Factors: A Caliber Effectiveness Guide for Self Defense and Body Damage

TDC Note – In a lot of states, if not all, if you wound the criminal who is attacking you – and they live – they could bring a lawsuit against you.

According to a sweeping 2016 survey, there were, at that time, more guns in the hands of Americans than there are cars on the road. Of the nearly 250 million guns owned by Americans at that time, somewhere between 40 and 50 million of them were handguns. Of handgun owners alone, 63 percent owned these for the purpose of protecting themselves against other people, with another 20 percent owning them for protection against animals. The former is by far the leading reason for handgun ownership.

This represents a cultural shift in America. The last time such a broad survey of gun ownership in America was done, long arms ruled the day and Americans were largely interested in weapons for hunting and other sporting uses.

If one keeps a weapon in the home for self defense, we believe that it is a duty to know the weapon inside and out and to train with it regularly. What’s more, for those who are considering purchasing a firearm for home defense, but have not yet done so, it is important to know what kind of firearm is appropriate for your needs.

All of this leads directly to the question of handgun wounding factors: the effectiveness of a handgun, lethality by caliber, and stopping power are all important considerations when purchasing a firearm for self defense. There’s no reason to mince words – a handgun for self defense exists to create damage to the human body. With this in mind, we will now explore handgun wounding factors. 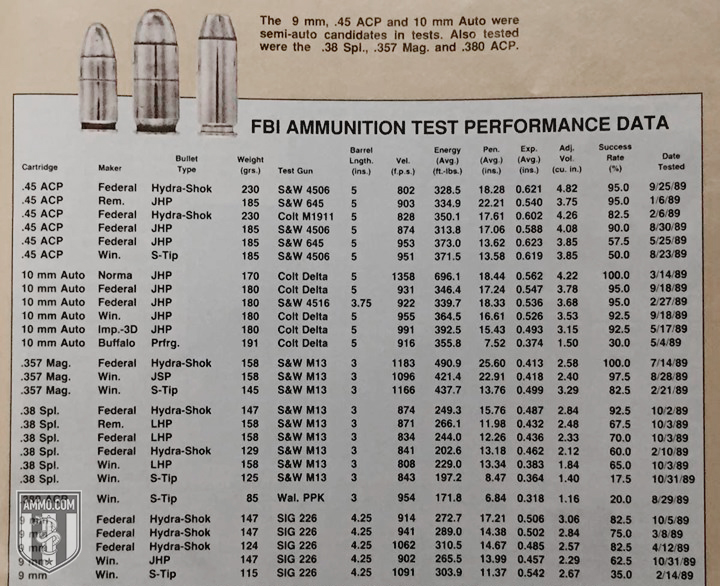 Note that buying a handgun for personal protection is not an abstract desire. It has been reported by Heritage about how there are a number of personal protection gun uses that make the news in any given month, but are given a tiny fraction of the attention that mass shootersand other violent gun criminals receive. Just how common are self-defense uses of firearms? The FEE reports that there are between 2.1 and 2.5 million defensive gun uses annually, which means you’re more likely to use a gun in self defense than you are to be killed in a car accident.

When a handgun is bought for personal protection, whether in the home or on the street, its purpose is the application of deadly force to protect your own life, the lives of others, and to prevent serious physical harm. Shooting another person is only done with the intention to, at the very least, incapacitate the subject to protect the physical safety of others. This is why you must choose your weapon carefully and train with it diligently. It is the concept that will underlie this entire article.

If, God forbid, you are ever in a situation where you are required to use your handgun, there is, to put it mildly, a great deal at stake. While there are uninformed opinions regarding stopping power, thankfully, there is also plenty of credible research. Still, the research is not widespread and a great deal of it is not terribly relevant for the average person searching for a reliable self-defense weapon.

In this article, we will present what we believe to be the most credible information regarding wound ballistics from studies conducted by the FBI’s Firearms Training Academy in legendary Quantico, Virginia. While this research is geared toward law enforcement officers, it cuts through the confusion, and provides common-sense, scientifically supported principles by which the effectiveness of self-defense ammunition may more generally be measured. And while it’s not the final word on wound ballistics, it’s an important contribution to what should be an ongoing discussion.