Rachel’s note: Regular readers know we’re bullish on gold. It’s real money… and the ultimate safe-haven asset to protect and grow your wealth during a crisis. If you’ve been following along in the Dispatch, you know our professional geologist and commodities expert, Dave Forest, believes we’re in the early innings of a historic gold run.

But a gold run isn’t the only trend Dave’s been following. He’s pinpointed an overlooked aspect of the tech boom… and several tiny companies set to profit. (In fact, he believes one company is just days away from securing a deal with Tesla… which could send it on a run for the ages.) For all the details, go here.

Then, check out today’s guest essay. We’re handing the reins over to our colleague Chris Lowe, editor at The Daily Cut. He’s worked with Dave for years, and has seen firsthand the strategies he uses to predict gold’s next move… and discover the best plays to take advantage.

Few investors have been paying attention to gold miners…

By contrast, gold mining stocks – as measured by the VanEck Vectors Gold Miners ETF (GDX) – are up 25%. 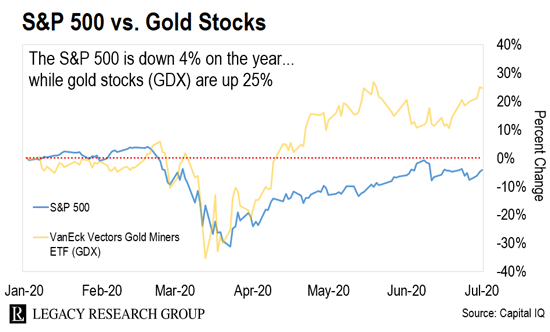 Despite these gains, gold stocks are still off the radar for most investors.

But as I (Chris) will show you today, that’s because they don’t have access to insights from our globetrotting commodities expert Dave Forest.

This year’s 25% gain for GDX – a broad play on the gold mining sector – is just the tip of the iceberg.

A megatrend we called early…

It’s hard to imagine today how bearish investors were on the metal at the time.

The price of gold bullion was down 37% from its peak. Gold mining stocks – as measured by GDX – were down 72%. 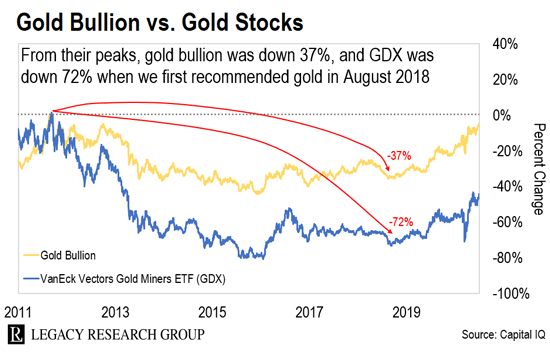 Things had gotten so bad that the Vanguard Group shuttered its flagship precious metals fund.

Investors were so done with gold… there wasn’t enough interest to keep the fund open.

But as mom-and-pop investors were throwing in the towel, industry insiders were turning bullish.

As we put on your radar at the time, our globetrotting geologist, Dave Forest, was picking up on some interesting chatter in the mining industry…

I think of him as the “Indiana Jones of Legacy.” He spends his time crisscrossing the world looking for buried treasures.

He even looks the part. Here’s a shot of Dave in Nevada, examining the rocks in an area that his NASA gold satellite system indicated was positive for copper and gold.