Normal Americans Are Fed Up With Feminazis, Antifa, BLM And Rioters – In Case You Missed It, We Are In The Midst Of Civil War In America

Normal Americans Are Fed Up With Feminazis, Antifa, BLM And Rioters – In Case You Missed It, We Are In The Midst Of Civil War In America By Susan Duclos – All News PipeLine

I wasn’t going to address Antifa again this soon, but a couple of patterns are emerging that need to be highlighted and violent Antifa and/or BLM members are part of that topic.

1.) Antifa “Feminazis” are using their female gender to become overly aggressive believing that no one will knock them right out of their face.

2.) Americans are getting sick and tired of the actions protesters burning cities down, destroying property and terrorizing towns and neighborhoods.

3.) The irresponsible liberal establishment media has blood on their hands and Americans need to hold them accountable.

FEMINAZIS THINK THEY HAVE THE RIGHT TO INTIMIDATE OTHERS

In my previous piece I ended it with a video, one that needs much more attention because of what it shows.

An elderly black man, defending the Lincoln Emancipation statue, while a younger, masked white female Antifa and/or BLM member got right up into his face, screeching like a banshee, informing him that it was a racist statue.

He asked her politely if she knew who funded the statue. Of course she didn’t,, so she just got closer into his face aggressively and howled even louder.

The funding drive for the monument began, according to much-publicized newspaper accounts from the era, with $5 given by former slave Charlotte Scott of Virginia, then residing with the family of her former master in Marietta, Ohio, for the purpose of creating a memorial honoring Lincoln. The Western Sanitary Commission, a St. Louis-based volunteer war-relief agency, joined the effort and raised some $20,000 before announcing a new $50,000 goal.

According to the National Park Service, the monument was paid for solely by former slaves:

The campaign for the Freedmen’s Memorial Monument to Abraham Lincoln, as it was to be known, was not the only effort of the time to build a monument to Lincoln; however, as the only one soliciting contributions exclusively from those who had most directly benefited from Lincoln’s act of emancipation it had a special appeal … The funds were collected solely from freed slaves (primarily from African American Union veterans) …

His point was made. She had no idea that the statue was funded with the wages of former slaves, to celebrate their freedom.

We also see how disrespectful a younger white Antifa member, one that claims to be on the side of “Black Lives Matter” by virtue of being there protesting a statue she incorrectly believed was racist, is to an elderly black man that is simply utilizing his First Amendment right of freedom of speech.

Obviously Antifa members only respect black people if they agree with them. 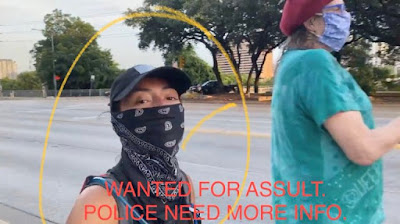 Next up, we have a Hispanic woman supportive of law enforcement and tired of seeing all police generalized by the action of some bad cops that the media highlights, while ignoring any good actions on the part of other police officers.