Democrats Are Working To Destroy America ‘By Any Means Necessary’

‘Democrat Revolutionaries’ Are Pushing For Their Own Slaughter By ‘Declaring War Upon America’ – So Arm Up Heavily Now, Because ‘War’ Has Been Declared Upon 10’s Of Millions Of Law-Abiding Conservative Americans 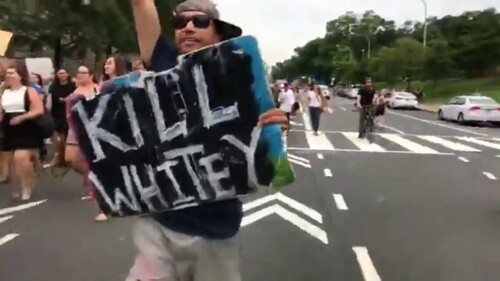 I don’t know about you but I myself am pissed off as hell about being called a ‘racist’ for merely supporting and loving America while some of the biggest racists and bigots in America are ripping down statues, destroying property that is not their own and running outright roughshod all over the country.

With it now proven that BLM has leaders that were trained in Marxism while being mentored by one of the Weather Underground terrorist members of Bill Ayers, and Democrats pushing their terrorism across America to the hilt, we’ll emphasize once more here, you better arm up fast in preparing to defend your families and loved ones because these devils won’t stop until they get what they believe is theirs, and if we listen to their own words, these devils want white people dead.

And with Democrats and the mainstream media backing leftist terrorism to the hilt throughout this entire ordeal, following their 3 years of lies, treason, crimes and sedition that should leave Barack Obama, Hillary Clinton, Joe Biden and many Democrats in Congress tried, convicted and executed if America was still a ‘nation of laws’, the fact that these devils are still walking free, and freely pushing their satanic agenda upon America, really tells us all we need to know in 2020, and it isn’t pretty.

So we’ll be exploring all of the latest signs that Democrats believe 2020 to be their year not only to take back power but do it by ‘any means necessary’, and the Black Lives Matter devils using children to push their terrorism and ‘call for revolution’ as we see in the image below, just imagine if these insane people are right, and they get their ‘revolution’, do they even tell the kids that any ‘revolution’ will be completely and totally resisted and opposed by millions of very well armed Americans who still support America and the ‘rule of law’ in this country? Like most matters, BLM doesn’t have a clue!

With most black homicides in America happening via black on black crimes while BLM completely ignores such statistics because they don’t conform with their marxist political agenda, just imagine an America like the one BLM envisions, where people are the enemies of the establishment just for being white, where people still living in the big cities as drug addicts in utter poverty are pandered to with their criminality making sure their every wish is granted. With such a scenario proving that ‘the rule of law’ no longer exists, not only black Americans will be likely to take the law into their own hands but ‘white Americans’ sure to resist any such tyranny in America themselves.

As President Trump himself recently warned, crime in Democrat-run cities such as Detroit, Baltimore and Chicago is totally out of control already, with those cities being transformed into ‘living hell’, and if this Democrat-insanity keeps heating up, we’re likely only witnessing the tip of the iceberg compared to what will come next.

‘Revolutionaries’ rarely understand that there are two sides to every fight. And with over 393,347,000 firearms in America, and probably well over 70% of those owned by law-abiding, Patriotic Americans well prepared to use them, we’ll argue here the ‘revolutionaries’ are pushing for their own slaughter.