Finally, The Hammer Is Dropping On Antifa And Other Liberal Domestic Terrorist Scum – Patriotic Americans Have Had Enough

Finally, The Hammer Is Dropping On Antifa And Other Liberal Domestic Terrorist Scum – Patriotic Americans Have Had Enough By Susan Duclos – All News PipeLine

We are sure it will come as no surprise that President Trump tweeted out something….. or that President Trump’s tweet sent social media liberals, yes, that includes the establishment media, right over the edge of any sanity they may have had left after 4+ years of Trump Derangement Syndrome (TDS) eating away at their brains.

Only this time, President Trump went after the the liberals “Golden Cows,” meaning the little domestic terrorists that have been running around toppling monuments, destroying property, committing arson, and rioting at will, just to name a few of their illegal antics

Yes, we are talking about Antifa and certain factions of BLM, which we will show you below.

Some of the examples you will see discussed have embeddable video coverage, others couldn’t be found on YouTube, but the video proof was uploaded to social media, so we will offer the links so readers can confirm the veracity of the assertions made in this report.

Let us begin with the formal ruling by a federal judge, in favor of two Catholic priests and three Orthodox Jewish congregants, and against liberal extremists, New York City Mayor Bill de Blasio and NY Governor Andrew Cuomo, for supporting and encouraging protesters and rioters, while persecuting people of faith.

Via Just The News:

In a Friday ruling, U.S. District Judge Gary Sharpe ruled in New York’s Northern District Court that both politicians had “arbitrarily” restricted religious gatherings while openly approving of the protests, some of which have resulted in “groups of thousands” of demonstrators, as Sharpe notes.

While it was only the NYC Mayor and NY Governor that was part of this lawsuit, anyone watching or reading establishment media news, clearly sees how the media, as well as Democrat politicians are actively supporting and encouraging the illegal activities on behalf of protesters aka rioters.

The ruling linked above is 38 pages and should be read in full, for those that have the time and/or inclination.

THE HAMMER IF FINALLY DROPPING ON ANTIFA AND BLM

President Trump’s tweet referenced above stated “MANY people in custody, with many others being sought for Vandalization of Federal Property in Lafayette Park. 10 year prison sentences!. @FBIWFO” 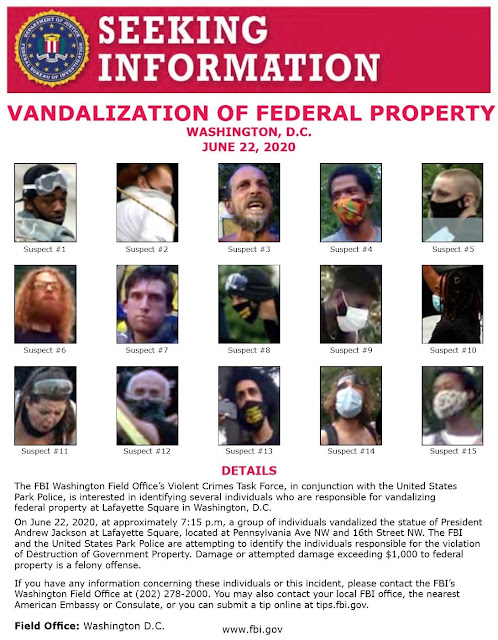 It isn’t only the federal government finally going after the liberal-supported thugs, but as we see below, Independent Journalist Andy Ngo, published the mug shots of a number of people already charged for things like felony riot, escape, felony theft, felony burglary, attempted assault of police, criminal mischief, and more. 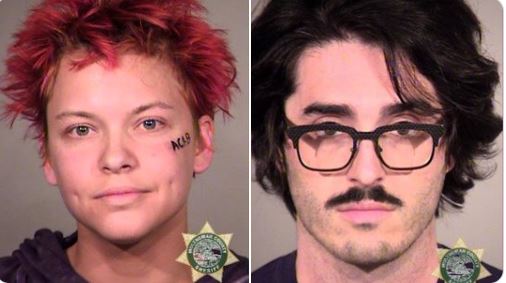 That is just a sample of two mug shots, Ngo has a thread of videos and mug shots with detailed descriptions of the crimes committed, found here. 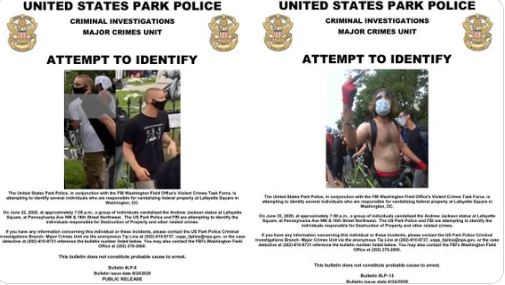 Other examples of Ngo documenting Antifa in Portland, include “Antifa rioters began trying to barricade the Central Precinct (they did that last night to North Precinct & set it in fire). Police knock rioters to the ground, angering their comrades.”


He also provides video evidence of white BLM activists dumping red paint all over the street outside the Salt Lake City DA’s office, and much, much more.

It is not only the federal authorities, local authorities, and park police that are finally pushing back against those committing these crimes, but it appears that there are some Americans out there that are sick and tired of what they are seeing Antifa, BLM and others getting away with, and are taking the fight to them.

For example: Black Americans heading to DC and chanting “All Lives Matter.”