We Should All Prepare, Now, While We Still Can As We Are Running Out Of Time

We Should All Prepare, Now, While We Still Can As We Are Running Out Of Time By Susan Duclos – All News PipeLine

Upticks in earthquakes, locust swarms destroying entire farms, pestilence and pandemics, economic collapse, civil unrest, all events that could cause massive pain, suffering and death across the globe individually, and yet we are seeing headlines across the world of all of things, at the same time.

Recently Michael Snyder for ‘End of the America Dream’ published a piece describing “really bizarre,” things that are happening around the globe right now in present day.

From the uptick of earthquakes in California and Nevada in the last week, to the COVID-19 pandemic and the civil unrest we have all been watching across America, with the global economy “imploding,” to the locust swarms that have devastated South Africa now being reported in Argentina and heading towards Brazil, destroying farms in its path, we are witnessing a time like no other.

For details, head on over to End of the American Dream to see just how many things are occurring at once across the globe.

Before moving along, I would like to highlight one more Snyder piece because kudos go to him for the “perfect storm” in my headline, as he explains why every person in America needs to become a prepper in the second half of 2020.

It has been on my heart to write this article for a few days, but I knew that it wouldn’t be easy to write. 2020 has already been one of the worst years in modern U.S. history, and it looks like the next six months are going to be extremely challenging as well. But even though most Americans are expecting that things will return to “normal” in 2021 and beyond, the truth is that the “perfect storm” that we are witnessing is only in the very early stages. All of the old cycles are ending, all of the bubbles are bursting, and we are starting to experience the consequences of decades of incredibly foolish decisions. So even though the remaining months of 2020 will be chaotic, the truth is that things are going to get progressively worse as the years move along. That means that you should use this period of time to prepare for what is ahead of us, because at some point the window of opportunity to prepare will be closed for good.

I have seen commenters speak to having a heavy heart as they watch events unfolding here in America, and just one look at the news on any given day, offers insight into why the world collectively feels like it has been irrevocably changed, to the point of “feeling” broken. 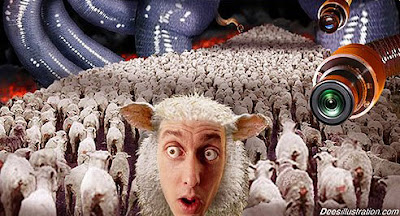 DON’T BE THE SHEEP

The first thing I see at the moment when I open Drudge is that the democrat party’s presumed presidential candidate, Joe Biden, is actually bragging that if he is elected he would violate every Americans constitutionally protected right of “freedom of Expression,” by mandating Americans be forced to wear masks.

Democrat governors are already trying to implement this mask mandate, but certain state Sheriffs are not only rebelling, but they are telling Americans “Don’t be a sheep.”

“Here’s what I say,” Lewis County Sheriff Robert Snaza told the crowd outside a church Tuesday, carrying a megaphone and sporting his green and beige uniform but no face mask. “Don’t be a sheep.”

Few of the people cheering on Snaza covered their faces either, according to video of the scene taken by the Daily Chronicle of Centralia, Wash. Indeed, the words on a billboard above the crowd seemed to capture their feeling about the pandemic: “Oh, no! A virus. Quick – burn the bill of rights.”

Of course the My San Antonio article made it a point to highlight that the Sheriff is a Republican and that the governor in question, Jay Inslee, is a Democrat.