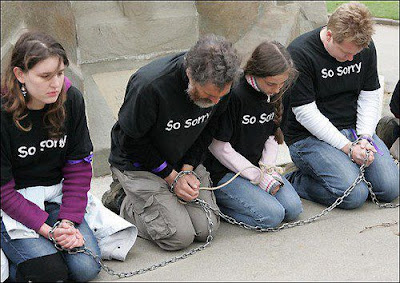 (White liberals apologize for being white)

At times one looks at the cornucopia of reports in present day’s 24/7 news cycle and it is almost as if we are living in an alternate universe, or the Twilight Zone, because it all seems so surreal.

From monuments to no-cop autonomous zones, to white liberals declaring they know what is best for black Americans, what we are watching is white liberal Democrats basically telling African Americans that do not think or act in the liberally-approved manner, to get their butts back on the plantation because they are incapable of deciding what to think, do, and believe for themselves.

WHY WHITE LIBERALS ARE PANICKING

The peaceful BLM protests are one thing, not to be mistaken with the rioters, white liberal Antifa thugs, arsonists and those destroying minority owned businesses in the name “destroying racism,” which is what we are discussing here.

The death of George Floyd was the incentive for the peaceful protesters, but is being used by liberals and Democrat politicians as an excuse to  sow discord and create chaos, for one simple reason.

Multiple polling organizations have found that a significant percentage of black Americans actually approve of the job President Trump is doing. Not a majority, but enough of a percentage to freak out Democrats, because they seem to think they “own” black America.

I rarely take stock in the exact numbers pushed out by pollsters, after 2016 we all know those are no better than guesses, as the skewed questions and respondent demographics often produce the results the pollster or news organization wants, rather than accurately take the temperature of Americans.

What I do watch is patterns. I have used this example before, but let me reiterate. Look at the trust in media. In the 1970’s they reached a high point of over 70% of Americans saying they trusted the mainstream media, and throughout the years, with tiny spikes here and there, those numbers have gone in a downward line and is said to be in the low 40’s today (41%).

The pattern shows Americans have been losing confidence in the establishment media in a consistent trend, whether we believe the exact percentages or not.

So, back to the point, while I take no stock in the actual percentages on the latest approval polls, the pattern is starting to come into focus.

The most recent Rasmussen polling on black approval rating for President Trump is over 40%.  In November 2019, when Rasmussen found a 34% approval rating among black voters, it was said to be “Democrats worst nightmare.” That 34% was found from two different polls from two separate organizations. In August 2019, that approval number was in the mid-20% range.

That type of pattern despite the MSM screaming “Trump is a racist” every single day for the last 5 years since he announced.

To put this into perspective as to how utterly devastating that could be for Democrats, and Joe Biden, we note that in 2016, Hillary Clinton received a whopping 88% of the black vote and Donald Trump only 8%.

And Trump still won the presidency.

No wonder they are panicked. 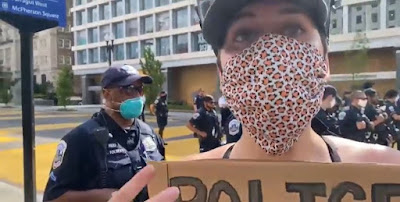 WHITE LIBERALS TELL BLACK COPS WHAT TO DO

This ladies and gentlemen are why white liberals are panicking, and why in that panic induced mentality, they are doing things that show their real thoughts about black voters and how they think they have the right to demand certain behaviors, thought processes and actions from black America.