– How Long Before The UN & ‘Chicoms’ Are Arming Radical Leftist Gangs?

With murders increasing 75% in New York city since Democrat-backed domestic terrorism began there and now, law enforcement in NY calling for a July 4th strike so leftists can have their ‘independence day without cops‘, potentially leaving much of the city burning down, we have to take a look within this story at a theory gaining much ground;  the Democrats ‘war on police’ is being purposely engineered to get them to quit across large parts of America so UN troops ultimately take over and rule American cities to help the globalists complete their sinister agenda for America.

As we also hear in the 1st video at the bottom of this story, Democrats/radicals across America are now antagonizing law enforcement officers to the point where many no longer want anything at all to do with enforcing the law. And as this new story over at the Examinerwhich Steve Quayle had linked to on his website Saturday morning reports, nearly 3 out of every 4 cops in Washington DC are already thinking about getting out of the force, with huge numbers of them also seeing crime will only increase in the days ahead if we keep on the path we’re now on. From this Examiner story before we continue.

Nearly three-fourths of Washington’s Metropolitan Police Department said in a poll that they are considering leaving the force amid a police reform bill recently passed by the D.C. Council.

The proposal would require law enforcement body camera footage to be released to the public more quickly following a police-related shooting and would restrict when officers can use lethal force. It also would prohibit the department from purchasing military-style equipment from the federal government.

Local lawmakers stopped an attempt by one council member at large who proposed to limit the size of the force and cap it at 3,500 from its current size of 3,863. However, several hundred on the force revealed to the D.C. Police Union, which represents 3,600 Washington officers, detectives, and sergeants, that they are looking to leave anyway.

Additionally, 96% of those members polled said they believe crime will increase, and 88% said officer safety will plunge.

When I first started hearing reports many years ago from websites such as Infowars and Zero Hedge that the Democrats/globalists were attempting to destroy America to bring in global government and a  ‘new world order’, I truly believed that such reports were ‘utter insanity’. But after seeing more than a decade’s worth of solid evidence of such since then as we’ll explore more below, it’s easy to see how correct the ‘watchmen’ have been. 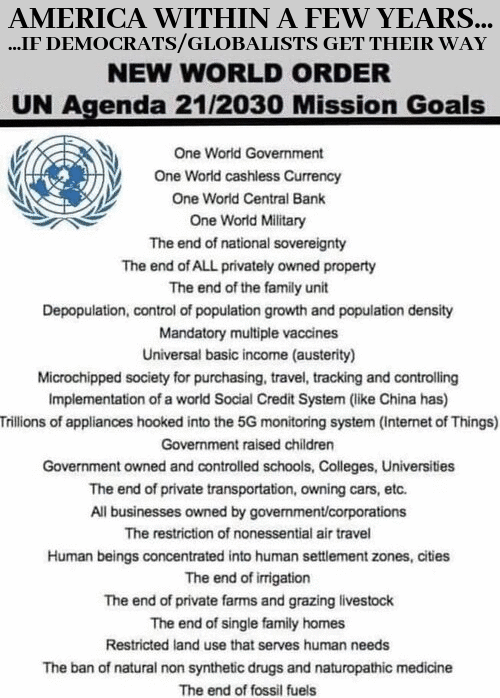 According to this April 2020 story over at ‘globalist gatekeepers’ Buzzfeed, an old ‘false conspiracy theory’ regarding the United Nations and a ‘sinister plan to take over America’ and the world and kill off much of the world’s population had re-surfaced due to Covid-19.

With the buzzfeed story mentioning both George Soros and Bill Gates as well as the United Nations Agenda 21, their story attempted to ‘tamp down’ very legitimate concerns that tens of millions of Americans have about global government overreach. Concerns now validated with the UN now holding ‘urgent debates on police brutality and human rights’, yet the UN neglecting the ‘personal responsibility’ of people such as George Floyd, who might not be dead right now if he didn’t commit a crime beforehand.

And while we’ll strongly agree that passing off a phony $20 bill should never lead to a ‘death sentence’, had Floyd never committed that crime, he’d likely still be alive right now, never putting himself in ‘the line of fire’ as he himself did. Yet with Floyd’s illegal actions leading to what we’re seeing now, including blm and anarchist rioters screaming ‘Kill Whitey’ while toppling statues of George Washington, Francis Scott Key and Ulysses S. Grant among many others, as Steve Quayle warned in an SQnote while linking to this story over at Information Liberation reporting upon the latest round of ‘leftist insanity’, “piece by piece the foundations of America are being taken apart – our history, borders, language and culture destroyed”.

So the Democrats war upon the police is very much a huge part of that agenda as they continue to work to destroy America as we see in the list of Democrats/globalists goals for America at the top of this story section. How many of those ‘mission goals’ have already been accomplished or are now ‘under way’? From their ‘war upon the family unit’ to the their 2020 push for a ‘universal basic income’ to their attempt to implement a social credit system similar to China to their push for mandatory vaccinations to their ‘depopulation agenda’, imagine America should they complete all of those goals listed above as we watch their sinister agenda being completed before our eyes. 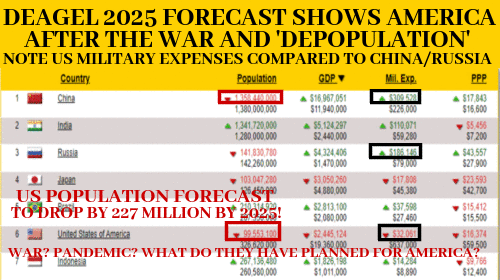 While long called ‘conspiracy theory’ by the mainstream media and most leftists, as we see in the chart above from the website Deagel, by 2025, America is being forecast to look like just a shell of our former country. With Deagel forecasting our population to drop from over 326 million to less than 100 million by 2025, a drop of more than 227 million, and our military expenditures being forecast to plummet from over $637 billion to only $32 billion by 2025, the forecast by Deagel seems to show an America which had either lost a major war or been hollowed out by a deadly pandemic.