CHINA’S EMP THREAT: America Is The Most Vulnerable Country In The Entire World To EMP And China Could Easily Send Us Back To The Dark Ages With This Technology

China has long known about nuclear high-altitude electromagnetic pulse (HEMP) and invested in protecting military forces and critical infrastructures from HEMP and other nuclear weapon effects during the Cold War, and continuing today. China has HEMP simulators and defensive and offensive programs that are almost certainly more robust than any in the United States.

China’s military doctrine regards nuclear HEMP attack as an extension of information or cyber warfare, and deserving highest priority as the most likely kind of future warfare. Chinese military writings are replete with references to making HEMP attacks against the United States as a means of prevailing in war. The foremost People’s Liberation Army textbook on information warfare, Shen Weiguang’s World War, the Third World War—Total Information Warfare, explicitly calls upon China to be prepared to exploit HEMP offensively—and to defend against it:

“With their massive destructiveness, long-range nuclear weapons have combined with highly sophisticated information technology and information warfare under nuclear deterrence….Information war and traditional war have one thing in common, namely that the country which possesses the critical weapons such as atomic bombs will have ‘first strike’ and ‘second-strike retaliation’ capabilities….As soon as its computer networks come under attack and are destroyed, the country will slip into a state of paralysis and the lives of its people will ground to a halt. Therefore, China should focus on measures to counter computer viruses, nuclear electromagnetic pulse…and quickly achieve breakthroughs in those technologies in order to equip China without delay with equivalent deterrence that will enable it to stand up to the military powers in the information age and neutralize and check the deterrence of Western powers, including the United States.”

China’s military doctrine closely associates cyber-attacks with nuclear HEMP attack, as part of a combined operation in what they call Total Information Warfare. Cyber bugs and hacking are the tip of the spear, the functional equivalent of scouts and sappers who do reconnaissance and secretly prepare the beaches for the arrival of D-Day, or like the motorcycle troops that preceded the heavy armored divisions in Germany’s Blitzkrieg.

Therefore, China’s cyber-attacks (for example, most notoriously in June 2015 on computers in virtually every federal agency, stealing sensitive information on millions of federal employees, reportedly on every employee of the Federal government) should be regarded as possible practice or preparation for Total Information Warfare—including nuclear HEMP attack.

An article “Overview of Electromagnetic Pulse Weapons and Protection Techniques Against Them” from the People’s Republic of China’s Air Force Engineering University describes nuclear EMP weapons as the most powerful and effective variant of electronic warfare weapons for waging Information Warfare. Nuclear and non-nuclear EMP weapons in the context of Information Warfare are the crucial instruments for implementing this Revolution in Military Affairs:

“In future high-tech warfare under informatized conditions, information warfare will span multiple dimensions, including ground, sea, air, and the EM spectrum. Information superiority has already become central and crucial to achieving victory in warfare…If the communications equipment used for the transmission of battlefield information were attacked and damaged by an opponent’s EMP weapons, then the one attacked would face the danger of disruption in battlefield information transmission. EMP severely restricts the tactical performance and battlefield survivability of informatized equipment.”

“As opposed to conventional and nuclear weapons, EMP weapons are a new type of weapon capable of causing mass destruction by instantly releasing high-intensity EMP…They can interfere, damage, and overheat electronics, resulting in logic circuit dysfunctions, control malfunctions, or total failure. The unique destructive effect that EMP have on electronic equipment was unintentionally discovered by the United States in the 1960s during a nuclear test. In July 1962, the United States conducted a high-altitude nuclear explosion in the Pacific Ocean. This…unexpectedly overloaded the Honolulu power grid in Hawaii, 1,400 km away, even overheating lightning protection devices on powerlines. On a battlefield, this new-type weapon will cause devastating damage to electronic systems, including computers, communications and control systems, and radars, resulting in immeasurable losses.”

Furthermore, according to the article: “There are 3 types of military EMP based on pulse sources: the first is the high-altitude EMP (HEMP) produced by the detonation of a low yield nuclear bomb in the atmosphere at high-altitude; the second is…produced by high explosives and related devices; the third is the HPM [High-Powered Microwave]…produced by HPM devices such as magnetrons and vircators.” Nuclear EMP weapons are, or include, Enhanced-EMP or so-called Super-EMP weapons designed to produce gamma rays and high-frequency E1 EMP: “HEMP weapons are a type of weak nuclear explosive EMP bomb that produces EMP through the detonation of low-yield nuclear bombs at high-altitudes (70 to 100 km above ground).” The E1 EMP field “produced by nuclear EMP is about 10 to 100 kV/m and can penetrate and melt any electronic components.” 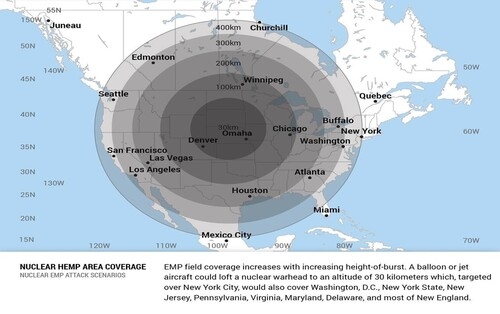 Chinese open source military writings describe the possession of Super-EMP weapons, as seen above for example in the article from the PRC Air Force Engineering University. How to execute a nuclear HEMP attack on Taiwan using a Super-EMP weapon was described in an interview with one of the founders of the PRC’s nuclear weapons program and Deputy Director of the Institute of Theoretical Physics, General Lin Chin-ching.