SEARCHING FOR ANSWERS by Thaisleeze for The Burning Platform 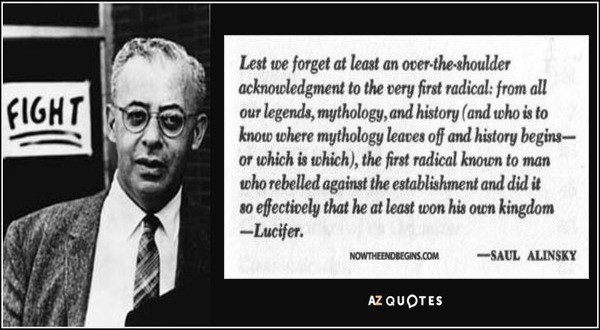 Over the past few years I have seen multiple blog references to an individual by the name of Saul Alinsky. Often these discussed his socialist teachings and his suggested methods whereby a socialist state might be achieved. Sometimes this man’s ideas were linked to the philosophies of a Marxist body known as the Frankfurt School. What I have read also sometimes argues that the Deep State subscribes to these ideas and aims.

Until recently I dismissed this idea totally. What I thought to be the character of the Deep State in the Five Eyes countries of the USA, UK, Australia, Canada and New Zealand was distinctly conservative and automatically contra to an extreme socialist system.

Very recent events, and upon reflection other events since the 2016 US election, are causing me to seriously reconsider my offhand dismissal of this theory. Has the establishment, over decades, been penetrated by Alinsky acolytes? Alinsky was certainly admired by Hillary Clinton, both letters and video recordings attest to that.

The big question becomes this; Is it really possible that a significant enough percentage of the civil services (encompassing the military, intelligence and educational establishments or any state funded body) believe in the theories of Alinsky and are prepared to take actions pushing Five Eyes societies in this direction, supported by politicians from both sides of all the aisles?

There is much evidence to consider.

The most obvious is the scenario known as Russiagate. The Deep State in the USA, UK and Australia attempted to fabricate evidence that would convince the world to unseat the new president. A huge gamble involving many players that has now been proven to anyone following the trail of public evidence. Recent evidence even suggests that Russia preferred to have the beaten candidate in the Oval Office. Was there a long term plan that depended on HRC being president?

Equally confounding is the singularity of messaging, across all topics, by big tech, TV and print media in all Five Eyes countries, and supported by large corporations. Almost without exception the messages have been the same for years; HRC is a shoe in. Russia did it! Wars are good. Immigration is essential, legal or otherwise. White people are guilty of everything. LGBTQBLT folk are sacrosanct. Believe all women. Covid-19 is going to wipe us out! Not all skin colours are equal. Bill Gates will save us all. You cannot say that, you must think this. Riots are described as being “largely peaceful”. All in perfect harmony across the English speaking world.

Local governments in many, many Five Eyes cities already clearly support the Alinsky ideal. Educational syllabuses are not designed to produce analytical critical thinking. Is there a single city that we can point to and say there is a world class system producing brilliant minds such as exists in Singapore? Higher education is even more tilted towards one dimensional thinking with tenured professors losing their jobs for stepping just a teeny little bit out of the progressive (Alinsky) line. Obedient graduates spread like a cancer through society over time.

Today we are told that to have the slightest negative thought about Black Lives Matter is a sin that was somehow missed from the 10 Commandments. In recent days we have seen what was unthinkable a couple of months ago, officers of the law prostrating themselves in front of BLM protesters.