While the majority of Americans already know the establishment media, often dubbed the Mainstream Media (MSM) has been moving further and further politically leftward over the past decades, coincidentally (or not) coinciding with the dwindling trust Americans have in the confidence of the media, we are seeing an intensification in 2020.

The MSM and big tech are now openly collaborating with leftist/liberal activists to shut down conservative Independent Media websites.

NBC blue-check “journalists” celebrated all over Twitter Tuesday afternoon after engaging in blatant anti-trust behavior, conspiring with Google to de-platform conservative news sites The Federalist and ZeroHedge. It later turned out that they had not quite succeeded in the way they had hoped, as Google backed off to some extent – probably on their internal lawyers’ advice – but the clear anti-trust nature of NBC/Comcast’s and Google’s actions was not lost on at least one GOP Senator.

Long story short, NBC, working with a radical, far-left activist group called “The Center for Countering Digital Hate,” to target a number of conservative Independent websites, starting with ZeroHedge and The Federalist. NBC then highlighted those sites to Google on behalf of the leftwing activists, to which NBC then reported that those two websites would be demonetized by disallowing google ads on their sites.

We have seen the MSM do things like this before but what makes this example of collusion and collaboration even more egregious, is they admitted to doing it openly on the social media platform Twitter.

The writer of the NBC piece is Adele-Momoko Fraser, as can be seen on her byline of the article in question. Fraser’s verified username on Twitter is @AMFraserNBC.

NBC News then promoted the article written by Fraser, with the message “Two far-right sites, ZeroHedge and The Federalist, will no longer be able to generate revenue from any advertisements served by Google Ads. @AMFraserNBC reports.”

Fraser then responded to that promotional by publicly thanking the radical liberal activist group for their “hard work and collaboration! ”

Interesting that a website which has “Stop Funding Fake News”as its name is actually peddling the biggest pile of horse manure online today.

Note: We linked to each of these websites since liberals, and yes that includes the MSM, are targeting them to be deplatformed, so we encourage readers to show them a little love.

This collaborative effort was noticed by GOP Senator Josh Hawley, who also noticed something very disturbing about googles messages regarding the demonitization of The Federalist.

The reason I say that is because Google publicly admitted it on Twitter. Screenshot for posterity in case they realize what they admitted and try to delete it: 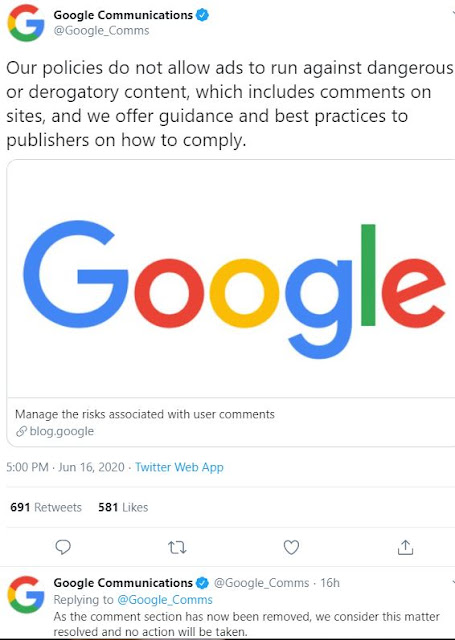 Hawley responded to Google: “Wait, wait – you want to treat the @FDRLST comment section, which they don’t curate, as THEIR speech but simultaneously say the content you directly host and modify IS NOT your speech under Section 230? Wow, this is getting really interesting.”

I just checked over at The Federalist and could not find a comment section. Apparently they were forced to remove it and chose to do so rather than remove Google Adsense.