One would have to be living under a rock to have missed the rioting, looting and mass destruction of liberal cities as protesters use the death of George Floyd to destroy the very areas they live, and the minority owned businesses in those cities.

They are attacking their city. Their own grocery stores, in some cases leaving entire areas without a store to get food for their families. They are burning cars and buildings. They are looting stores as if they are “entitled” to the free merchandise because a black man died in police custody.

Make no mistake, the images of a law enforcement officers with his knee of Floyd’s neck, with Floyd saying he can’t breathe, are horrendous and infuriating. With that said demanding a change in police procedure is a far cry from the over-the-top, violent response we have seen to date.

Considering that more whites are killed than blacks in police custody, what we are seeing is nothing more than Floyd being used as an excuse to riot and burn stuff down.

Some liberal state leaders are forcing their officers to stand down and let their cities burn. Other politicians, desperate for votes are “taking a knee” in front of protesters. Law enforcement in multiple cities are kneeling before violent protesters.

Nothing says weakness like handing your city over to a bunch of rioters, looters and criminals.

Now we are seeing a massive movement by liberals to defund the police.

In Los Angeles, liberal Mayor Eric Garcetti has already taken back a planned increase for the LAPD and is now seeking to cut $100-150 million from the police budget.

GIVE THEM EXACTLY WHAT THEY WANT

There is an old expression: “Be careful what you wish for; you may receive it.”

Radio host Mark Levin recently pointed out that these people, these towns, these rioters and all those that are egging them on to continue to commit violence, should all be given exactly what they want.

The key suggestions by Levin, via social media:

• 1. Due to systemic racism in law enforcement, and the disbanding of the police in our cities, I suggest we pull all security protection from Biden, Obama, Bush, Pelosi and Schumer. For their own sakes. I also suggest we pull the Capitol Police from Congress.

• 2. Can’t trust those cops with our precious representatives, either.  While we’re at it, let’s yank protection from the Supreme Court. And how about we pull security at sports stadiums, pro-athlete locker rooms, Beverley Hills and Brentwood.

Lets pull all law enforcement off of liberal streets in cities where the politicians are encouraging the rioters.

While at it, do not send any 911 responders  into areas given to the rioters.

The mayors and governors that are kneeling before the rioters that want them dead, should not have any protective services either, at work, nor at home.

The “thank you” these suck-up politicians get is perfectly exemplified by Michigan’s Governor Gretchen Whitmer. She marched with the protesters, kneeled with them…..they destroyed her governor’s office. 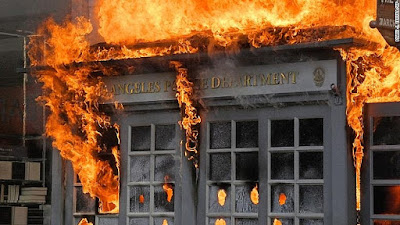 LET THEM ALL BURN

Notice how the most damage, fires, looting and crime during these “peaceful protests,” are occurring in cities run by liberals, with a majority liberal population?