TDC Note – Stormy Daniels, Russia did it, impeachment, plandemic, martial law, civil unrest – nothing is working. More and more people support President Trump with each passing crisis. The democrats, and more importantly, their deep state owners, would be better served to shut up.

George Floyd’s death has sparked civil unrest throughout the world. In Athens, Greece, protestors flung firebombs at the US embassy. In France, President Macron urged citizens not to compare France with the US as he does not feel police brutality, racism, or government control is an issue there. French citizens seem to disagree as 2,500 people attended a rally in Lille, 1,800 in Marseille, and 1,200 in Lyon. Germany, Denmark, Italy, Britain, Brazil, Ireland, Canada, New Zealand, Syria, and countless other countries are experiencing a surge of protests standing in solidarity with the US. But the unrest runs even deeper than yet another murder by armed government workers.

After weeks on end of forced isolation, the people are waking up to the control that the government possesses over every area of their lives. Anger is overtaking fear as thousands are disregarding the CDC’s continued pleas to stay at home and avoid crowds. There is no rule of law. Governments can and will act in their own self-interests and continue to view the people as “the great unwashed” who are not worthy of basic human rights. They can kill us, take away our jobs, our freedoms, and destroy the economy at will. Is it any wonder that the people have lost confidence in their governments? 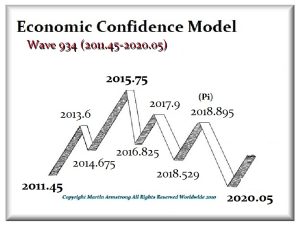 The chaos is cyclically unfolding on schedule. All confidence in the government has been abandoned due to the draconian measures forced upon the people in such a rash manner that it could not be ignored.