Market worrying about a phenomenon much worse than stagflation?

The 30-year Treasury yield has been rising for six days in a row, closing on Thursday at 1.61%, up from 1.41% on May 29, and up from 1.17% on April 20, and the highest since March 19, when the Fed was unleashing its multi-trillion dollar Everything Bubble Bailout. 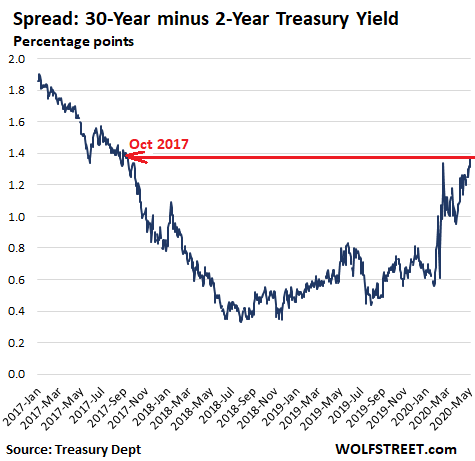 And this widening of the spread and thereby the steepening of the yield curve has been happening although the Fed has bought $1.6 trillion in Treasury securities since early March, as part of its $2.9 trillion Everything Bubble Bailout.

When a yield curve steepens, it is sometimes associated with the reaction in the market to a strong economy. And that would be a good thing. But this is the worst economy in our lifetimes, and any improvement – there will eventually be some improvement – will just make the economy a little less terrible.

Rather than seeing a strengthening economy, markets might be worrying about inflation, given all this money-printing in combination with trillions of dollars in government stimulus spending, even as the economy is in terrible shape.

Stagflation of the 1970s was a condition where the economy was in decent shape, compared to today’s economy, but just wasn’t growing much, while inflation was ballooning. Today’s economy is an unspeakable fiasco, and a big bout of inflation that would eviscerate the purchasing power of labor – of the lucky ones that still have jobs – would create a phenomenon far worse than stagflation.

The Fed would of course welcome a big bout of consumer-price inflation that will eviscerate the purchasing power of wages.

This inflation would allow it to declare victory over the fake deflation monster. The Fed is not likely to react to inflation, having already hammered home many times that interest rates are going to stay low for a long time. Markets see this too. If consumer-price inflation takes off, under the combined pressure from money-printing and stimulus-spending – while wages cannot keep up because of high unemployment, thus further crushing those that make a living by working – the Fed is going to pat itself on the back.

The economy is currently under a rare combination of simultaneous supply and demand shocks in many aspects as factories and service establishments were shut down, and as companies have slashed capacity, from airlines and container carriers to automakers, creating tight supply in some areas.

Inflation, at these still super-low long-term yields, would be a serious threat for bondholders as their bonds would lose much of their purchasing power over the term of the bond. And there would be very little yield to compensate them for that loss of purchasing power. The rise in yields, and the steepening of the yield curve might be an expression of a growing distaste for this type of scenario.