These Images Are Not From A War Zone, But ‘Liberal America’

These Images Are Not From A War Zone, But ‘Liberal America’ That Is Literally Burning – The Pathetic Left Resorting To Violence In Attempt To Overthrow President Trump & America Is A ‘Call To Arms’ For All Patriots By Susan Duclos – All News PipeLine

As America burns after nearly a week of massive riots all throughout the nation over the death by cop of George Floyd, a man we now know via autopsy had coronavirus and found to have “Fentanyl Intoxication” And “Recent Methamphetamine Use,” we note that outside groups have infiltrated the “peaceful” protesters and are committing acts of domestic terrorism.

Make no mistake, people should not die in police custody, but the entire picture does need to be acknowledged, and the fact that Floyd was not exactly the poster boy for the boy scouts, is something the media and liberals refuse to acknowledge, so we mention it not as an excuse or justification for his death, but as part of the fact pattern.

Images from around the country look like they have come from a war zone, they haven’t, this is America.

Antifa, Black Lives Matter and other groups known for their use of brutal violence in the name of “anarchy,” with claims they are “anti-fascist,” yet use fascist tactics at every turn, have decided to literally light America on fire.

We’ll be covering a lot of ground in the article, from the infiltration of Antifa, to the inherent right of defense of self and property, to the President wanting to officially designate “Antifa” groups as domestic terrors,to Democrat politicians and liberals across the board giving active support to domestic terrorism within America, all in the name of wanting President Trump to lose the November 2020 election.

They couldn’t skew the 2016 election no matter how many trusted “polls” said Hillary Clinton couldn’t lose and how many media outlets actively campaigned against Donald Trump.

They couldn’t overthrow the duly elected President with three years of the Russian collusion Hoax.

They couldn’t  overthrow him with a Democrat-led witch hunt aka sham impeachment.

Now they are willing to burn the entire nation to the ground, since nothing else worked for them.

We’ll start off by acknowledging that there are some peaceful protesters, but the images we have seen from all around the country, some of which are within this article,indicates that those “peaceful protests” the media continue to reference, do not exist because they have all been infiltrated by;

1) Protesters that simply want to riot;

2) Outside groups, such as Antifa and BLM, that are almost always associated with violence.

3) Democrat operatives actively supporting, via bail money, and other financial support, the most violent of these domestic terrorists.

The “protests” that continue to make the news, generate the headlines, and produce the images seen throughout the world, are nothing more than out-of-control riots. 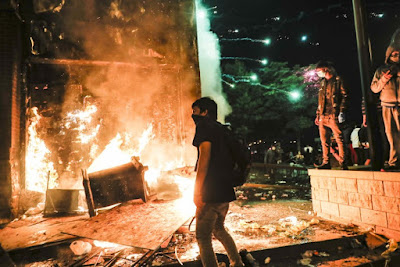 As can be seen in just the few images we are showing out of hundreds from the week of riots, there is nothing peaceful about most of these protests,despite the medias outlandish claims to the contrary. 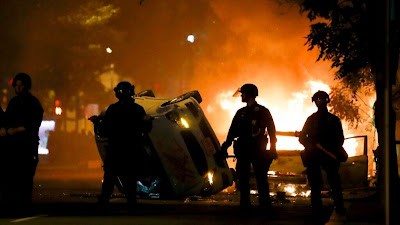 Burning minority owned businesses and communities. Illegally looting from businesses, stores and even burglarizing homes. Destroying everything in their path, from lighting vehicles on fire to randomly attacking law enforcement officers that had absolutely nothing to do with the death of George Floyd.