Five Reasons Trump Will Legalize Cannabis Before the Election

While the world remains distracted with the COVID-19 hysteria, almost nobody has noticed that the stars are aligning for the ultimate cannabis catalyst…

The federal legalization of cannabis could be imminent, and the implications are profound.

I’m convinced President Trump has no choice but to legalize cannabis at the federal level, and that he will do so before the presidential election on November 3.

Specifically, I think Trump will legalize medical marijuana at the federal level and then leave it up to the individual states to determine the legality of recreational cannabis.

According to the most recent Gallup poll, 66% of Americans are in favor of legalization. By contrast, the Canadian government fully legalized cannabis in 2018 when it had the support of 68% of Canadians.

Support is at an all-time high – since polling began about 50 years ago – and shows no sign of slowing down.

Perhaps the most drastic change in recent opinions has come from Republicans.

Here are just a few examples…

He then joined a cannabis investment company.

If legalization is happening in even these deeply conservative states, it can happen anywhere.

Here’s why it matters.

There is now no political downside for a Republican to support cannabis legalization.

It’s an enormous political development that was unthinkable just a few years ago.

Supporting cannabis legalization is an opportunity for Trump to win over Democratic voters ahead of the 2020 election. He’d be foolish not to take it. It’s all upside and no downside.

Cannabis legalization has already passed the tipping point. A growing majority of states have already legalized cannabis in some form.

As we can see in the graphic below, 33 states (plus Washington, DC) have legalized medical marijuana. And 11 states (plus DC) have approved recreational use. A handful of others have decriminalized or otherwise softened their cannabis laws. 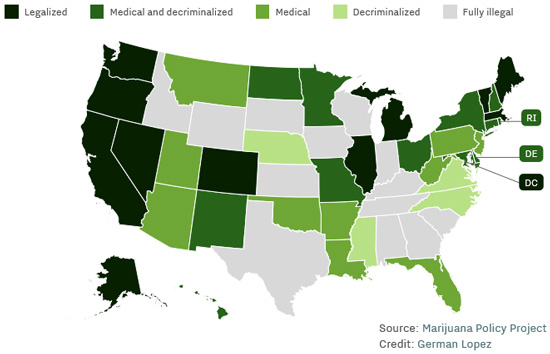 There is more to come.

New Jersey will vote on recreational legalization in the November elections.

Cannabis legalization could also be on the ballot this fall in Arizona, Mississippi, South Dakota, and other states.

Also, in many of the states that have or will legalize cannabis, the tax revenue will exceed that of alcohol and tobacco. In other words, cannabis is already a permanent part of many state budgets.

Trump insiders have explicitly stated that Trump is in favor of letting the states decide the issue. In other words, federal legalization.

The US legal cannabis industry is too big to shut down. There’s simply too much money and too many jobs at stake.

Big Business has already entered the legal cannabis market, including most big alcohol and big tobacco companies, among others.