Meat Shortage, Limits On Purchases Are Here To Stay While The Establishment Media Ignores It Or Pushes Climate Control ‘Eat Less Meat’ Propaganda

Meat Shortage, Limits On Purchases Are Here To Stay While The Establishment Media Ignores It Or Pushes Climate Control ‘Eat Less Meat’ Propaganda By Susan Duclos – All News PipeLine

Browsing through the news regarding the animal based protein price hikes, shortages, and information about the meat shortages being seen throughout the country, we note a definite pattern of reporting by the establishment media.

In most cases local news in each state explains how the shortage began with COVID-19 infecting employees from processing plants, therefore forcing certain plants to temporarily close, as well as how ranchers have the meat, but because of the closure of restaurants, diners and schools which are closed so no longer ordering the bulk they used to.

The mainstream media either ignores the issue or reports on it then buries under their latest “ORANGE MAN BAD” outrage of the day or week.

Those in the national media that are highlighting the story are doing so by pushing their “eat less meat agenda,” as is evidenced by a couple recent agenda-driven articles.

Such as CNN, headlining with “Overcome the coronavirus meat shortage by adopting one of the world’s healthiest diets.” (Archive.is link here)

Within the article it highlights the Mediterranean diet, describing it as “emphasis on plants: fruits, vegetables, grains, nuts and seeds. Fish and other seafood are consumed at least twice a week. Cheese and yogurt show up daily to weekly, in moderate portions; chicken and eggs are okay on occasion, but the use of other meats and sweets is very limited.”

In other words a plant based diet.

In another story with a headline of “Worried about beef shortages and price spikes? Here’s what happens if you eat less meat,” CNN goes on to babble about “plant-based protein” decreased chances of death, while that nasty ole-meat increases it.” (Archive.is link here)

While CNN would probably explain such reporting as trying to “inform” readers of the benefits of getting rid of meat in your diet, that completely ignores the climate change agenda that liberals, including the majority of the liberally-biased media, have been pushing for ages.

Look to the highly mocked “Green new Deal” plan by the bimbo from new York….errrrr….. the ignorant congresswoman from the Bronx, Alexandria Ocasio-Cortez, which pretty much informed everyone they shouldn’t be eating meat, as pictures of her and her campaign manager at the time showed her sitting there while he was chomping down on a nice juicy burger. 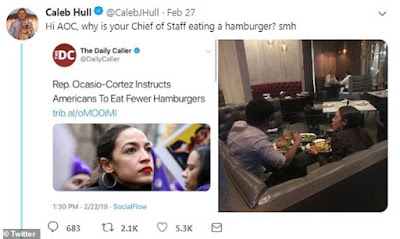 The point here is the establishment media either ignores the meat shortages and price hikes, bury the stories, or highlights on an agenda-driven aspect which conforms the the “eat less meat” movement.

As we see smaller websites, Independent Media reporting which carefully explains the how and the why of the shortages and price hikes we are seeing throughout many grocery stores across the nation, with some even limiting the number of packages of meat that can be bought per customer, the so-called mainstream media is most definitely failing to inform their audiences of how bad it is, and how much worse it will get. 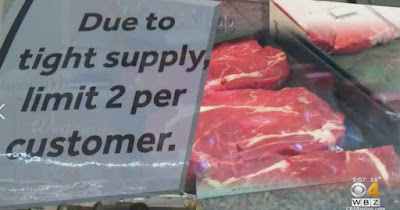 The animals slaughtered because of lack of demand by bulk purchasers, with no plan to reroute that meat to local grocers, will not magically come back to life to provide meat after the crisis is over. In turn, once demand comes back, the livestock that was already killed is no longer there, so the shortages will last even longer at the grocery store. 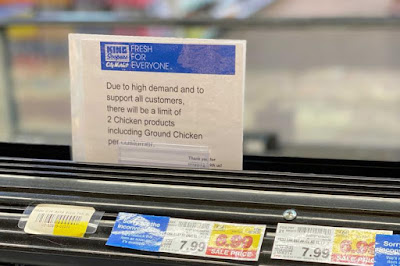 With talk of a possible “second wave,” of COVID-19 and how processing plants are a hot bed of infection with so many working in such close contact, this is not an issue that will suddenly disappear, but will linger, and perhaps never quite be the same as it was before all this chaos.

What we aren’t seeing much of in all the reporting is something that ANP has been trying to consistently report and that is meat products that are in stock for delivery for those that 1) Don’t appreciate grocers putting limits on their purchases, and; 2) Aren’t ready to visit establishments with large groups of people until this pandemic is declared over. (Which may be never if the speculation about COVID-19 being a bio-weapon is correct)