Americans Labeled ‘Defiant’ For Praying, Working, And Living Free – Time To Tell State Leaders ‘We Will Not Comply’

Americans Labeled ‘Defiant’ For Praying, Working, And Living Free – Time To Tell State Leaders ‘We Will Not Comply’ By Susan Duclos – All News PipeLine

As President Trump vows “we are not closing our country” again if a second wave of COVID-19 hits the states, even before many states are even fully open, a cornucopia of conflicting news articles make one point abundantly clear….. the so-called “experts” do not have a freakin’ clue what they are doing.

From contrary rules and regulations via “executive order” by governors, to arbitrary dates chosen to “allow” businesses to reopen in an attempt to kick states’ economies back into gear, we have come to the conclusion that elected state leaders also do not have a freakin’ clue what they are doing.

I am the first to admit that I am not an expert, but given the ramifications from  actions on the part of state leaders who somehow thought violating Americans constitutional rights was justified in the name of their “we know what is best for you” mentality, it is safe to say that looking at the big picture, they have a made a mess of everything.

Tens of millions have lost their jobs and their ability to feed themselves and their families or to keep a roof over their heads.

Businesses have been forced to close their doors, some of which will never recover and will stay shuttered.

The higher than average death rate of elderly in nursing homes and retirement facilities, directly caused by politicians such as NY Governor Andrew Cuomo’s orders forcing them to accept COVID-19 patients, have left families suffering and many funeral homes became overrun.

The forced lockdowns to date have done nothing but postpone the inevitable according to the “experts,” which is why we are now being warned of an expected “second wave” in states that are “reopening,” meaning allowing people to finally move on with their lives.

In the midst of all of this pain and suffering caused by overreaching and tyrannical Governors,  as well as dire warnings by “experts,” a new study by JP Morgan shows that “Many US states have seen LOWER infection rates after ending lockdowns,” as reported by The Daily Mail.

Here are the key points from that story:

• A JP Morgan study suggests lockdown measures have not only resulted in economic devastation but could have also resulted in more COVID-19 deaths.

• Strict stay-at-home orders put in place in most states to stop the spread two months ago has so far seen nearly 39 million American lose their jobs.

• Report says infection rates have been falling seen since lockdown measures were lifted in parts of the country.

• Alabama, Wisconsin and Colorado are among those that saw lower infection rates (R rates) after lockdown measures were lifted, according to the report The R rate is the average number of people who will become infected by one person with the virus.

The story linked right above the Daily Mail article I cited said “Dallas, Houston, Southeast Florida’s Gold Coast, the entire state of Alabama and several other places in the South that have been rapidly reopening their economies are in danger of a second wave of coronavirus infections over the next four weeks.”

So, are infections going to get worse again before the curve flattens or are rates dropping in states that are reopening?

Stay tuned, I am sure there will be another study, another expert, and another storyline, soon.

The media, who has basically declared themselves “essential,” so therefore are still working and getting a paycheck, seemingly have no problem with 39 million Americans being out of work and are actively pushing longer lockdowns, which will cause even more job loss, and if the JP Morgan study is correct, will kill even more people.

A position that many liberals collectively seem to support, as some simply want government pandemic checks for doing nothing, to continue.

Note: We at ANP, along with other Independent Media websites, encouraged voluntary self-isolation if possible as well as protective and preventative measures taken by the healthy to stay that way. In no way, shape or form should  the government, local, state, or federal, be allowed to violate Americans’ constitutional rights by forcing people to wear masks, gloves, social distance or close their businesses by deeming them “non-essential,” or any other “Arbitrary, Unreasonable, and Oppressive,” overreach by Governors, as quoted by the court. 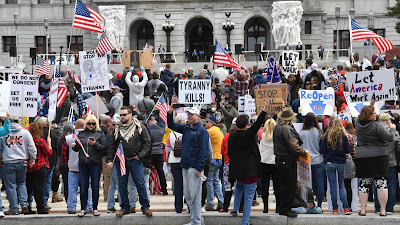 In my second paragraph from the top I put quotation marks on the word “allow,” because we are seeing that word thrown about by the media, liberals, even conservatives, although granted the conservatives are using it to highlight the tyranny and overreach of state leaders that are “allowing” businesses to reopen.

Churches are being “allowed” to have services again…..well, in some states, in others, such as California, they aren’t “allowed” to reopen, yet 1,200 pastors have agreed to reopen on May 31, 2020 in “defiance” of state orders.

Now, it appears, that going about your business, praying in a house of worship or attending services, is a “defiant” act.