‘Constitutional Attorney’ Claims Americans Have NO RIGHT NOT TO Be ‘Vaxxed’!

‘Constitutional Attorney’ Claims Americans Have NO RIGHT NOT TO Be ‘Vaxxed’! By Stefan Stanford – All News Pipeline

If Americans needed any more proof that SOME in government are using this ‘covid-19 crisis‘ to unveil more tyranny across America, we get it today from numerous different sources including the 1st video at the bottom of this story in which we hear Broward County Administrator Bertha Henry discussing how the government there may have to FORCEFULLY REMOVE sick people from their own homes to quarantine them due to coronavirus.

As we had reported previously on ANP, during the middle of the coronavirus crisis in China, that totalitarian, communist nation was also forcefully removing people from their homes and quite literally welding others inside of their homes so they had no way to get out and get food, water and other supplies. And while we haven’t quite arrived at THAT point here in America yet, who is to say that such a ‘possibility’ is ‘out of the realm of possibility’?

With even the World Health Organization back in April discussing going into family homes and removing sick people, quite literally separating them from their families, as Susan Duclos had reported on ANP back on April 5th, local government officials are losing their minds if they truly believe that ‘protecting people’ by ‘treating them like criminals’ is ‘the answer’. And as Susan had warned in that story, treating innocent and law-abiding American citizens like criminals could very easily lead to another civil war in America.

And as we’ve also previously reported on ANP, true ‘tyranny’ takes all shapes and forms and as we hear in the 2nd video at the bottom of this story, according to US Constitutional Attorney Alan Dershowitz, Americans HAVE NO RIGHT NOT TO get vaccinated!

While we’d recently reported on ANP that “The Battle Of All Battles Is Ahead: If The CDC & ‘Big Pharma Mafia’ Think They’re Going To Just Inject Poisons Into American’s Bodies Without A Fight, They’ve Got Another Thing Coming!”, according to Dershowitz, (who as our videographer explains, was an attorney for none other than Jeffrey Epstein), Americans don’t even have a right to ‘resist’ (though as my own ‘Doctor Kwok’ found out back in the early 1970’s when attempting to give me an injection, ‘resistance’ to ‘hostile injections’ , like tyranny, runs DEEPLY in my blood!) 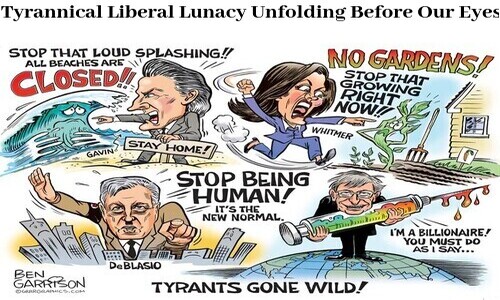 So before we continue, let’s take a look here at this important new story by Mac Slavo over at SHTFPlan within which he warns that the true goals of the global elite in unleashing this planned-demic upon America have come into crisp, clear view and as we’d warned on ANP back on May 13th, there is little doubt that the globalists are ‘setting up Americans for the kill’. From Slavo’s story.:

The elitists who planned this scamdemic from the beginning are now warning us that we are going to face a “dark winter.” This is not about health and hasn’t been from the beginning. This is about control and they are trying to use fear to manufacture your consent to enslavement. DO NOT FALL FOR IT.

Straight from the biggest player in propaganda and fake news, CNN, comes an article designed to terrify. It says Rick Bright has warned Congress of the “darkest winter in modern history” without a ramped up coronavirus response. Meaning, unless you submit to even more tyranny and fully enslave yourselves to the ruling class, it’ll be “dark winter.” The lies coming from CNN it’s contributions are unbelievable at this point. It’s hard to believe anyone tunes in anymore. Do not let these puppets of the tyrannical ruling class scare you anymore.