This Is Utterly Insane: COVID-19 Pandemic Is Making People Crazy As Total Irrationality Rules The Day

Over the past few months we have seen a lot of “COVID-19 craziness.”

Locking down entire states, arbitrary deadlines, idiotic regulations and mandates by states’ leaders, people doing things that could arguably be called utterly insane, and as we see story after story of things getting even crazier, it becomes apparent that we are living in a moment of time where complete irrationality rules.

We’ll begin with the governors across the nation ordering people to “social distance,” meaning stand at least six feet apart from each other to prevent the spread of COVID-19, then taking it further in some of the most states run by liberal politicians, by threatening enforcement against anyone that violated those social distancing rules, and even arresting people for standing too close to each other.

Think that is an exaggeration? Well in New York city the NYPD are actively arresting people for violating the social distancing and the mandated wearing of a mask, and in the short under-a-minute video below, we see that as police are arresting people for standing too close together, one of the cops approached a bystander and attacked him, then arrested him, for no apparent reason.

While we are seeing more and more of those stories coming out, we are also seeing that violent criminals already convicted and in prison, are being released because of the spread of COVID-19.

Think about for just a minute. Arrest peaceful citizens for standing too close together, while releasing violent criminals from prison.

Top that off with a recent 5-4 state Supreme Court ruling in Washington State where 4 out of 5 judges would have allowed some of the most violent criminals to be released,  including the infamous Gary Ridgway, aka, the Green River Killer. A serial killed that was convicted of murdering 49 woman and evaded capture for two decades.

The Green River Killer – who murdered at least 49 women and evaded capture for two decades – has been denied release from prison, as thousands of Washington prison inmates are told they must stay behind bars during the pandemic.

The state Supreme Court of Washington voted 5-4 Thursday against releasing prisoners across the state while the coronavirus crisis rages on, after victims and the attorney general’s office voiced outrage that some of the nation’s most dangerous criminals could be let out onto the streets.

Sure, arrest and fine citizens for standing too close together or *GASP* not wearing a mask, but attempt to release a mass murderer that was convicted of nearly 50 murders but was believed to have killed up to 80 women.

If that isn’t utterly insane, what is?

In Los Angeles County  a man was arrested three times in one day after being released because of their zero-bail policy because the coronavuris outbreak.

The policy is intended to keep the jail population lower due to COVID-19 concerns, officials say.

On Wednesday, officers responded to a call of a man attempting to break into a vehicle in the city of Glendora, in the San Gabriel Valley. According to the police, Dijon Landrum, 24, was allegedly attempting to drive away in the stolen vehicle. Landrum was arrested, issued a citation and released, officers said.

About an hour after Landrum was released, the department said it received a call about a man allegedly taking items from residences’ front yards. The responding officers allegedly found Landrum at the scene in possession of stolen items.

The third arrest was for stealing a car, and he was released with just a citation for that as well.

States are quite literally arresting people for doing nothing more than going on with their lives, but releasing criminals and inmates.

There is something seriously wrong with this picture. 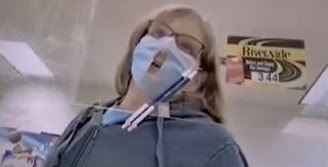 Recently Stefan Stanford shared a link and a 22 second video with ANP readers, and the utter craziness of what you see in the image above, cannot be overstated.When asked about her mask, she explains that she is wearing the mask because she has to, but cut out the face-part so it is easier to breathe.