Where’s The Beef……And The Chicken, And The Pork? The Food Shortages Are Already Here

Where’s The Beef……And The Chicken, And The Pork? The Food Shortages Are Already Here By Susan Duclos – All News PipeLine

I am old enough to remember the “Where’s the beef” Wendy’s commercials from the 1980’s. Those little old gray-haired ladies, trying to get hamburgers, which usually had very little meat, and one old lady always asking “Where’s the beef ?”

Today that question is being asked along with “Where’s the pork,” and “Where’s the chicken,” as grocery stores aren’t able to keep their meat shelves full.

We have seen how the forced shutdowns of schools, businesses and many restaurants during the COVID-19 pandemic has left farmers and ranchers with a surplus of harvests because the orders, the demand, has dried up. Vegetable and fruit crops having to be destroyed is only one part of the food shortage equation.

There are a number of reasons, one of which is that meat processing plants are seeing employees infected with the coronavirus, forcing them to shut down whole plants.

Almost a third of U.S. pork capacity is down, the first big poultry plants closed on Friday and experts are warning that domestic shortages are just weeks away. Brazil, the world’s No. 1 shipper of chicken and beef, saw its first major closure with the halt of a poultry plant owned by JBS SA, the world’s biggest meat company. Key operations are also down in Canada, the latest being a British Columbia poultry plant.

While hundreds of plants in the Americas are still running, the staggering acceleration of supply disruptions is now raising questions over global shortfalls. Taken together, the U.S., Brazil and Canada account for about 65% of world meat trade.

“It’s absolutely unprecedented,” said Brett Stuart, president of Denver-based consulting firm Global AgriTrends. “It’s a lose-lose situation where we have producers at the risk of losing everything and consumers at the risk of paying higher prices. Restaurants in a week could be out of fresh ground beef.”

Another cause of the shortages, now and most likely for the foreseeable future is much the same as the issue with fruits and vegetables. While people are going hungry and food banks are short on food, the way the supply chain functions has been disrupted, leaving huge wholes in the ability to get the food where it is needed the most.

It is like trying to get from A to D when B and C are simply missing.

Related: The Pentagon Will Use AI to Predict Panic Buying, COVID-19 Hotspots

On April 22, 2020, The Orange County Register published a piece which began with “Shoppers, you’ve got two weeks to stock up on meat, and prices are rising fast.” 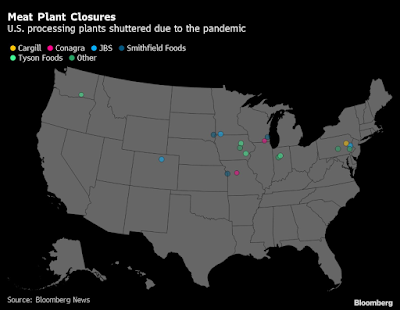 Independent Media sounded the alarm and warned that this issue was a probability back in January and February, and many readers took those warnings seriously and stocked up on what they could.

It often appears that by the time the establishment media finally catches up and starts reporting something, it is already too late to deal with it properly.

The most difficult part of supplementing what you already have to keep preparing is actually find what you want still in stock, or having the option to have a reasonable time frame for shipping and delivery.

We know this because we have done plenty of “back/still in stock” pieces and the hunt for items took far longer than anything else.