QE-4 Cut in Half this Week. Fed’s Helicopter Money for Wall Street & the Wealthy Hits $1.8 Trillion in 4 Weeks

QE-4 Cut in Half this Week. Fed’s Helicopter Money for Wall Street & the Wealthy Hits $1.8 Trillion in 4 Weeks from Wolf Street

Total assets on the Fed’s weekly balance sheet jumped by $272 billion in one week, to $6.08 trillion, according to the Fed’s release Thursday afternoon. Since the Fed started this spree of Wall Street and asset-holder bailout programs four weeks ago, total assets have exploded by $1.77 trillion. 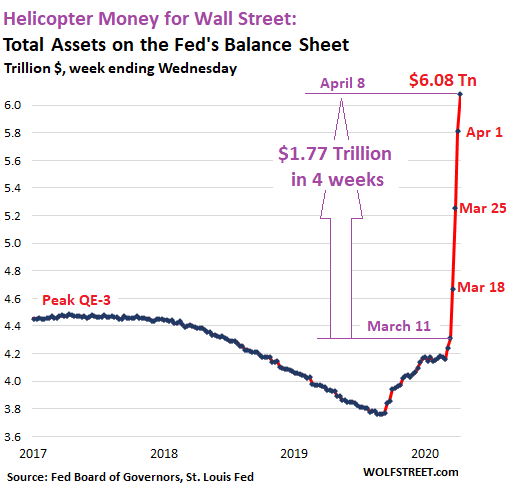 The asset side of the Fed’s balance sheet is mostly composed of Treasury securities, mortgage-backed securities (MBS), repurchase agreements (repos), “foreign central bank liquidity swaps,” and “loans.” We’ll go through them one at a time.

The Fed added $293 billion in Treasury securities during the week of the balance sheet. But the total balance sheet increased by “only” – so to speak – $272 billion. This $293 billion spike in Treasury securities this week was lower than the spikes in the prior weeks which averaged about $350 billion. This is one factor in the cut-in-half QE-4. For now, the Fed is sticking to its announcement that it would drastically cut QE from the prior weeks. 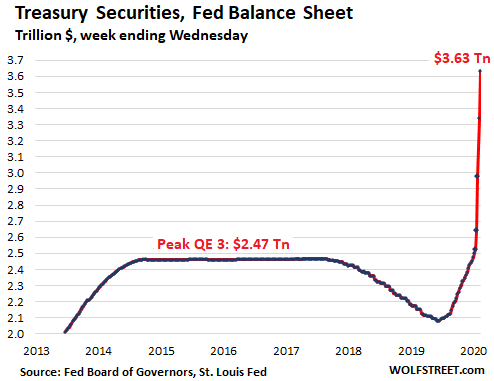 Repos on their way to irrelevance.

As of today’s balance sheet, the total balance or repos outstanding has plunged by 56% from the peak on March 18, to $192 billion. Over the 7-day period, repos dropped by $70 billion, which is another factor in the shrinkage of QE-4: