Historically, Comets Have Been Seen As Harbingers Of Disaster, Linked To Pandemics & Death On A Mass Scale, And Now One Approaches Earth

Historically, Comets Have Been Seen As Harbingers Of Disaster, Linked To Pandemics & Death On A Mass Scale, And Now One Approaches Earth By Stefan Stanford – All News Pipeline

– Comet Atlas Has An Atmosphere Five Times The Size Of Jupiter!

The following introductory paragraph comes to us from this entry at the Journal of Cosmology.:

For much of history comets have been associated with death and disease. There is increasing evidence that some life on Earth originated in comets and other stellar debris. If passing comets have continued to deposit viruses and microorganisms on this planet, this may explain why ancient astronomers and civilizations attributed the periodic outbreak of plague to these stellar objects. Moreover, the subsequent evolution and extinction of life may have been directly impacted by the continued arrival of bacteria, archae, viruses, and their genes from space. On this picture the evolution of higher plants and animals would be impacted by the insertion of genes from space, as well as recurrent episodes of pandemic disease. Near-culling pandemics and extinction episodes have in fact been preceded by or followed by inserts of viral genes into survivors who have transmitted these viral elements to their progeny, thereby impacting future evolution. Although ancient fears and reverence of comets may be coincidental with the outbreaks of pandemics, they may also have a factual basis.

With Covid-19 now wreaking havoc upon America and much of the world, some might ask why we’ve decided to bring ‘comets’ into the picture within this story and as you’ll see within the remainder of it, there’s a HUGE reason why!

While we know now that this coronavirus pandemic first ‘went viral’ in Wuhan, China, whether naturally or a man-made bioweapon, certainly taking away most of the possibility that it was caused by a comet, that ‘something HUGE’ that came into the picture at the end of 2019 and has largely been ignored is getting a lot of attention from some of our readers and they’ve asked that we investigate this ‘something HUGE’ a little bit more and, to say the least, we’re stunned by what we’ve found out.

So let’s not waste any more time before introducing ‘Comet Atlas’. Just discovered at the end of December on the 28th of that month, ‘Comet Atlas’ may soon be visible to the naked eye, expected to make it’s close approach to the Earth on May 23rd before it’s closest pass by the sun on May 31st. Already being called the ‘brightest comet’ of 2020 with some saying that it will soon be the brightest object visible in the sky short of the sun and the moon, as this story at the Daily Mail reports, the comet’s atmosphere will be close to 5X BIGGER than Jupiter and more than half the size of the sun.

And while their story reports that Atlas poses no danger to our planet Earth as even at it’s closest approach it will still be more than 72 million miles away, all ancient civilizations, without exception, have looked upon comets with a sense of trepidation and awe. Comets were considered to be harbingers of doom, disease, and death, infecting men with a blood lust to war, contaminating crops, and dispersing disease and plague (Hippocrates 1900; Olson and Pasachoff 1999) Ancient Chinese astronomers chronicled numerous episodes where the apparition of comets preceded plague and disaster.

Just a coincidence that ‘Comet Atlas’ will soon be making an appearance to us here upon our planet Earth, possibly visible to people across the world, in this day and age of Covid-19 we’re now living in? This recent story over at Forbes is titled: “A Bright Comet With A Tail Could Adorn Twilight Just As The Coronavirus Epidemic Peaks”. 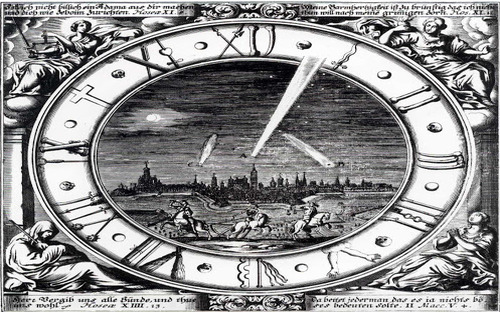 So let’s take an extended look here at recently discovered ‘Comet Atlas’ before we continue.

According to scientists, ‘Comet Atlas’ aka C/2019 Y4 may be a fragment of the same ‘parent body’ as the Great Comet of 1844 due to similarities noted in the orbital elements of the two comets. From Wikipedia: The first orbital calculations for the comet were published on the Minor Planet Electronic Circular, and were based on observations taken between December 28, 2019, and January 9, 2020, which indicating a 4,400-year orbital period.